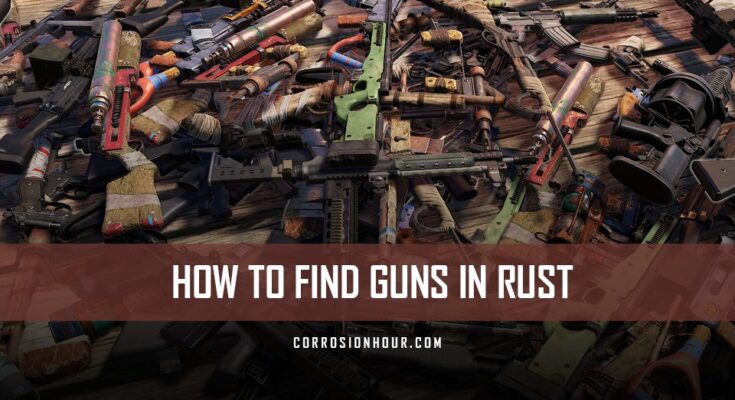 Finding Guns in RUST — a Priority for All Players

RUST players spawn into the world with a rock, a torch, and their knowledge of the game. They are immediately up against uneven odds, and they have steep challenges ahead of them, including but not limited to other players holding a significant advantage: Establishment. So, for new spawns and players raided into oblivion, finding guns in RUST is the top priority to help tip the scales in their favor.

Guns are essential for survival since they provide a sense of security and power. Found in different lootable crates, on scientists’ corpses, and crafted at workbenches, there are many factors to consider when hunting for guns in RUST, such as:

All of these factors play a massive role in choosing your preferred gun. Different guns in RUST deal varying amounts of damage to your opponents, depending on your target’s range, armor type, and the ammo used.

Here are 11 different ways to find guns in RUST

Regardless of the method, you now have the knowledge needed to find guns in RUST. Depending on your current assets, you should be able to pick the best plan for the moment. Not all guns in RUST are equivalent. Each serves a specific purpose, so choose wisely, and good luck!