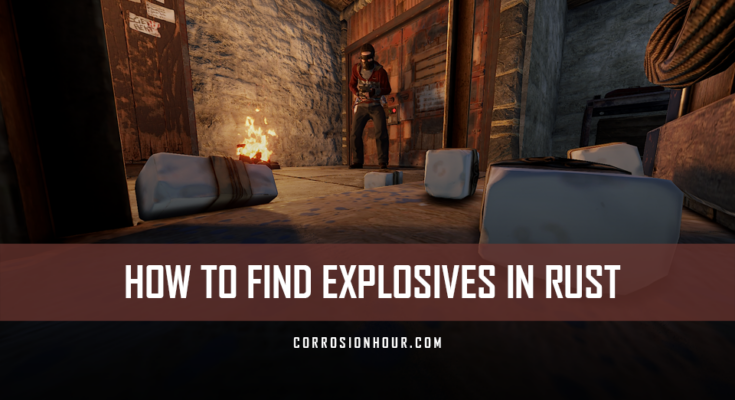 The Best Ways to Find Explosives in RUST

When you’re looking to improve your raiding capacity, either in tackling more massive bases, raiding faster, or more efficiently, you’ll need to learn how to find explosives in RUST. Explosives are the component that underlines almost all end-game raiding tools.

Explosives are a necessary component for:

In time, you’ll find that satchel charges as a raiding tool are hugely inefficient, not necessarily in terms of production cost, but regarding raid success. For instance, doors in RUST can require anywhere from 2 to 12 satchel charges to destroy. Compiling that fact, many more players know how to honeycomb a base and set up airlocks as a standard feature of their base designs.

Knowing that you have two doors to blast through, and probably metal doors, as they are a bare minimum requirement to fend off flame-raiding, you’re looking at eight satchels minimum for a raid. The sound a satchel charge makes is distinct, and the sound of several going off in quick succession tells people precisely where an attack is going on.

Once your first satchel goes off, you’re on the clock for counter-raiders to begin arriving from all tiers of play. Low-geared players will take their chances, and high geared players will know they’re better equipped than you and will strike at a moment’s notice.

Once you learn how to find explosives in RUST, you can craft superior raiding tools, such as the timed explosive charge. The resounding crack of a singular explosive taking out a metal door will let less geared players know you aren’t to be messed with, and will even give better-geared players pause before they decide to kit up and roll out.

With the time saved from waiting on satchel charges or silenced explosive rounds, you might even make it to the target’s tool cupboard and get your replacement doors down before counter-raiders arrive.

5 of the best ways of finding explosives in RUST:

While looting crates in RUST is the standard way to find the components you’re looking for, finding explosives in this manner is not very efficient. Crates that contain explosives are rare and often well-protected. 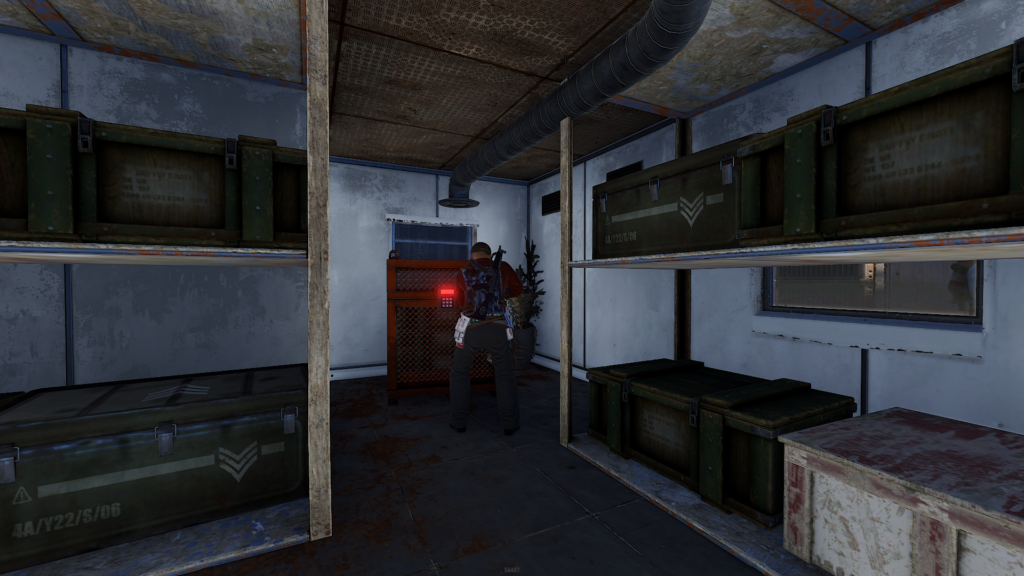 Explosives can be found in:

The locked crates are the only containers with a better than the negligible possibility of having explosives, and both of them set a timer that must be waited out before the crate unlocks. Both locked crates have the capacity to let other players near and afar know the crate countdown has started. The oil rigs’ containers will summon an NPC Chinook helicopter with a host of armored scientists to defend the location before the crate becomes available, which brings us to the next method of finding explosives.

While scientists, NPCs, and crates have low rates for explosives being found, they both have a much higher likelihood of dropping the raiding tools that can be recycled into explosives. 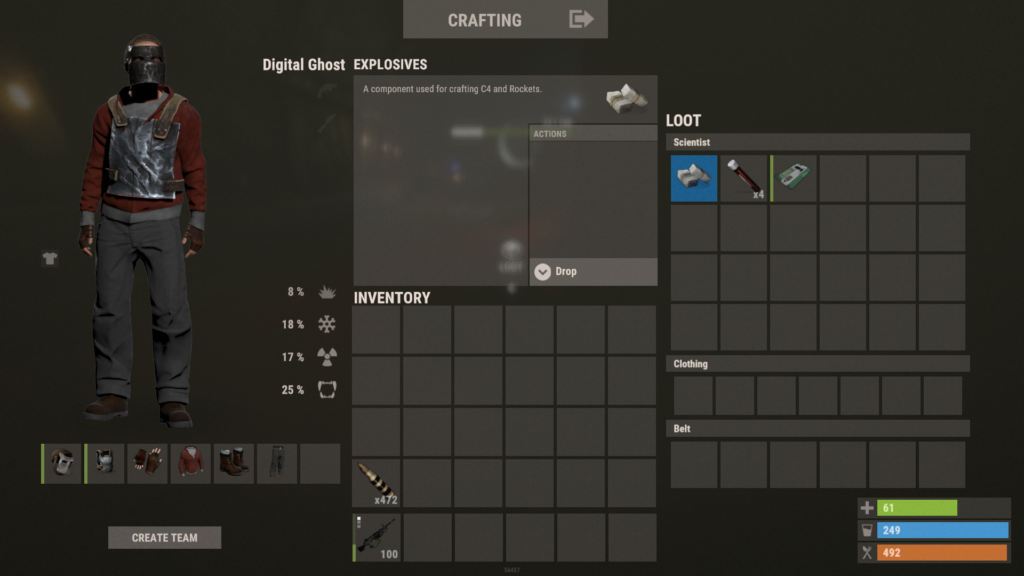 While heavy scientists have an insignificant explosive drop rate, they have a 14% drop rate for 40mm HE Grenades. Grenades, when recycled down, have a 25% chance of yielding explosives. 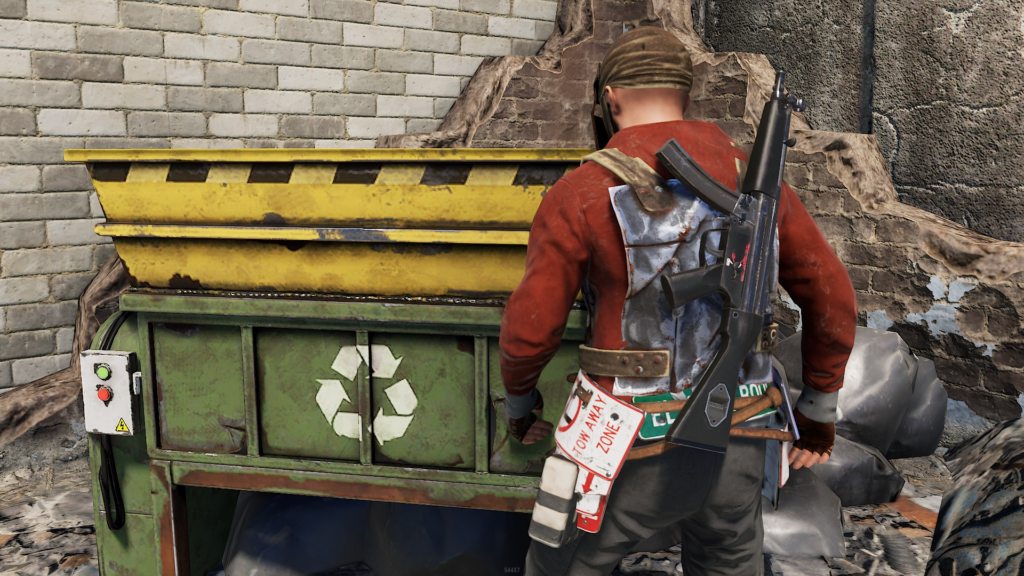 Both the rocket and the time charges can be found in the locked crates, with the timed explosive charge having the benefit of appearing in supply drops. So while these sources give you low odds of finding explosives specifically, the other things they contain can be broken down to provide you with the explosives you’ll need to remake them.

Remember to hang onto at least one of the rockets or timed charges found so that you can research them into a blueprint.

Trading with players for explosives

Players are often reluctant to give up raiding tools unless they’re very confident that they’re not a target. This fact doesn’t stop many players from putting recyclable rockets and or explosives on the market due to their high value.

Either negotiate with players directly in the public chat or look around on the map for player built vending machines that sell raiding tools. It never takes long to find some, but the prices some players ask for them can be relatively high.

Experimenting for explosives on a tier-3 workbench

If you find yourself unable to perform any of the above methods in a pinch, you can roll the dice and experiment with a tier-3 workbench. It will cost you 1000 scraps at the bench to try for explosives. And you run the risk of getting a random blueprint from the list of tier 3 items. There are 18 potential items to experiment for, and you can get any one of them, providing you don’t have the blueprint already. 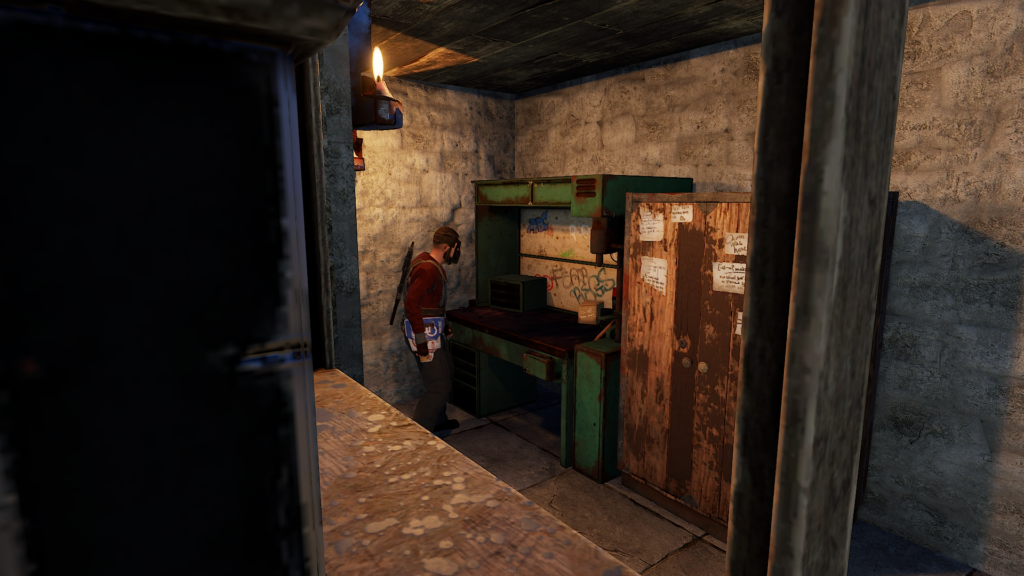 If you’re reaching the end of the wipe, you’re desperate, and you have a lot of scrap to burn, experimenting might be the way for you. Even earlier in the wipe, it’s not a total waste to experiment at the tier-3 workbench.

While it is costly, the other items that can be unlocked by are rarely disappointing. Just keep in mind that the odds are against you successfully getting explosives until you have significantly whittled away the list of tier 3 item blueprints.

Playing with the big kids

Now that you know how to find explosives in RUST, you get to leave the sandpit and take on the larger groups. With rockets, you can hit 4 wall surfaces at once, and the timed explosive charges will pop doors off in no time at all. Just remember that now you’re in the big leagues, larger groups and clans will be gunning for you too.