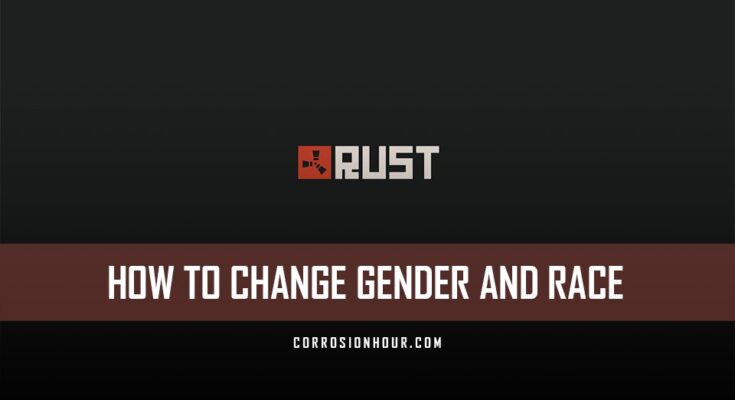 Changing Your Gender and Race

Nearly all RUST players, both veteran and newcomers alike, have sought out ways to customize their RUST character’s gender and race. With the ever-growing outcry for this feature, RUST Experimental does not support changing your race or gender.

Numerous guides and tricks have popped up over the years, sharing potential ways to modify or impact your character. Your mileage will vary in all scenarios.

Why exactly don’t they support it though?

Intention. Facepunch Studios, the developers of RUST, designed it to be this way. This decision became reality to all RUST players when female models were introduced to the game in Devblog 105. Triggering one of the largest gaming controversies in history. Up until this point, roughly 2+ years, RUST characters were always selected as male, with the race being randomly selected.

Media outlets, such as PC Gamer and Kotaku caught wind of the developers break away decision, as it made headlines on each respective news and gaming site. After the flames had been stoked and public outcry made its way across the internet, Garry’s response to the sharp critiques was published in The Guardian. He details in a long-winded forum post why exactly his studio made this decision.

How do RUST’s character gender and race selection work?

For all RUST players, their character’s gender and the race will automatically be determined based on their unique Steam ID. It’s important to note, players do not have control over their Steam IDs, beyond creating new Steam accounts. Thus leaving the gender and race selection process up to pure chance.

Can I change my character’s gender or race?

Other methods that Users will find detail setting up brand new Steam accounts and linking them under the Steam Family Share feature. This doesn’t change your existing character, but can be used to create a brand new character. Each new account allows for another chance at the random selection process.

On the popular Oxide Mod forums, there are many threads of players requesting a custom mod to be created, along with hints and tips around how to create one. These have become dead ends in looking for ways to customize a character’s gender and race. Being that the Steam ID cannot be manipulated, there’s no method for plugins to effect this.

When female avatars were being tested, RUST developer Andre had introduced a console variable dev.gender that could be utilized by RUST server administrators and moderators, however, this too was removed and is no longer available. This was originally brought to our attention by the good people at Rustafied.

Admins are no longer all female
The female model is still not quite ready to be rolled out. In lieu making it live (and to still allow for testing), Andre has created a developer cvar (dev.gender) to allow developers and moderators to set their gender on the fly (and made everyone male by default).

Admin note: If you’d like to be female again, set ‘global.developer true’ then change dev.gender from -1 to 1.

Parting notes for those seeking change…

Hey cool, you can pick your own gender 😡 pic.twitter.com/9y0Q0GD4mS