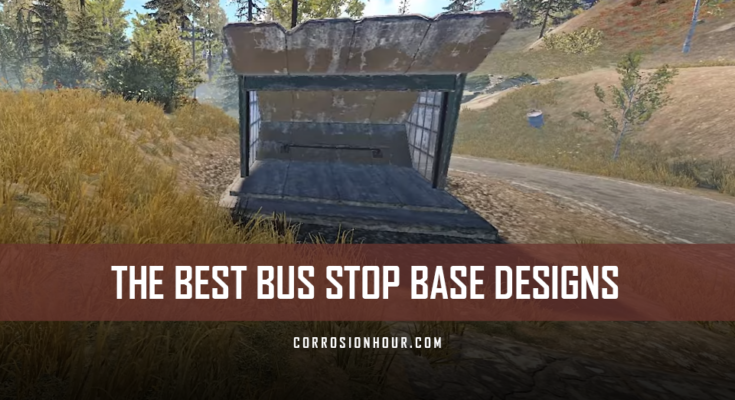 How to Build the Best Bus Stop Base in RUST

This RUST base design video, How to Build the Best Bus Stop Base, is brought to you by our partner Cruxal.

In this video, Cruxal walks us through his method for both locating and creating the best bus stop bases, post the road-building-nerf. As players can no longer build on roads anymore, this base building guide makes finding a good bus stop trickier but also means that bus stop bases will become more unique due to the terrain’s layout.

Hey guys, I just wanted to say thank you for supporting me. I’ve recently reached 5k subs and I’m really grateful. If you’re watching one of my videos for the first time and enjoying the content, hit subscribe and turn on notifications and get juicy new content as it releases.

Oh nice! A bus stop, this is going to be perfect!

As you’re probably guessed, you can still build inside bus stops. Which is great news for builders. You can indeed still make neat vaults, bunkers and trap bases using bus stops.

This doesn’t mean that they weren’t nerfed. Because you cannot build on roads anymore, it means that bus stops cannot be expanded towards the road. This makes finding a decent bus stop not only tedious, but each bus stop base will have to be unique in some way because of the terrain.

To quickly find a buildable bus stop by opening the map, all you have to do is find the small dots next to roads. Like this one, or this one. The ones at monuments won’t work though. You’ll need to find the ones near swamps like this one for instance. They all have small electrical outputs near them. Just make sure that it isn’t too close to the bus stop before you start your build.

Here’s the best method that I have found so far to seal up a bus stop. It’s a little tricky so I recommend having a little bit of building experience. You can also try this on a creative server. The trick is building it at the right height. When placed correctly, it will allow you to build into the bus stop with either squares or triangles. Here I used triangles as it allows me to put honeycomb on one side.

For the back of the bus stop you’re free to build how you’d like.

For this video, let’s just concentrate on how to seal the front and some additional cool things you can do. In a lot of cases, you should be able to place the honeycomb on the side where the road ends, so I suggest putting the TC on that side.

Make sure you have a bag and your TC ready before you seal yourself inside the bus stop. Then, you can either leave it open for more storage, but I like sealing it with a window. You can put a furnace in there with it also.

Place some boxes around and make sure they don’t stick out the back. You can place deployables through the glass which is the method we’ll be using to transfer loot in and out of the bus stop. For this example, I used a small box, but you can use a large box or even drop box.

I really like placing drop boxes instead of regular boxes through the glass but it requires preparation. To place drop boxes, you actually have to do this before starting the build. As you have to place foundations in a precise way. You line up the back of the foundation a few pixels behind the glass. If done right, you’ll be able to place a drop box on the wall. I’ve placed mine so it doesn’t stick out of the bus stop and not too much in the corner. That way, I can still place a door frame and other items.

Then, you can go ahead and remove your twig blocks and your drop box will stick to the bus stop.

You can also do the same with the back of the bus stop if you’d like. Once you’ve done this a few times, it’s pretty easy to do.

I’ve also tried to make shotgun traps stick to it, but no matter what I tried, it unfortunately didn’t work.

Once you’ve sealed up your base, there’s other cool things you can do. Like placing slanted boxes on the back of the bus stop. You can also place triangles into the vault to fit additional storage if that’s something that suits you. Just remember that this will make the vault much harder to navigate.

When you get access to high quality metal, make sure you upgrade the front of the bus stop. As stated, you won’t be able to build further out because of the road. Then, upgrading the adjacent walls to metal will also give you extra protection for low cost.

Now let me show you how to build into the bus stop using square foundations. But first, let’s chop some salad.

Salad.io is an app that lets you earn money in multiple different ways. First, you can do so with offer walls. For example, downloading this mobile game and reaching its goal nets you twenty dollars. You can also turn your PC into a crypto miner while you’re AFK. Getting snacks in between gaming sessions? No problem. You can easily amass quick, easy money to trade for games, gift cards and even discord nitro. There’s absolutely no hassles, like making crypto wallet or transferring funds. You download the app, you install it, and you run it. That’s it. Salad is completely open source which means it is safe to use and has no hidden spyware and all that crap. Now go download salad, use my referral code, get two times the earning rate and get yourself some games.

All right, enough salad for now. Placing square foundations is essentially the same as triangles. It’s a little tricky and you have to get the height just right to get them to fit. To make them evenly centered, make it so that the edge of the foundation sticks out the side of the bus stop like this. If done right, you’ll be able to place the other foundation without problems. The downside to this is since square foundations are much bigger, you won’t be able to add a single triangle outside like we did earlier, which makes this a little bit more vulnerable than the triangle version we made earlier.

You probably want to know how to build this sick base that has a roof bunker, a vault, a trap and a two hundred IQ automatic loot dispenser 3000. Make sure you thumbs up and I’ll see you in the next video.