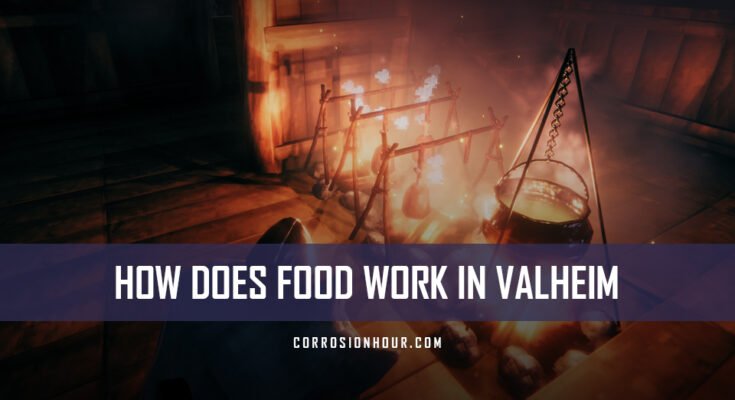 Viking Gordon Ramsey wouldn’t let you eat raw meat, and neither would we

There’s no reason for the food in the afterlife to be bland or not nutritious. There are no Michelin stars to be found in Valheim, but that won’t stop you from producing your five-star meals.

Most importantly, your food in Valheim will give you generous buffs to your health, stamina, and health regen rate, but only if you maintain a varied diet.

Food in Valheim affects your maximum stamina, maximum health, and passive healing rate. If you haven’t eaten, you won’t lose health, but you will have a minimal health and stamina bar, and you won’t get passive health regeneration.

Each type of food will also tell you how long that food takes to digest. It’s a good idea to pair up foods that take similar amounts of time to digest so that when it comes time to eat again, you can simply eat a similar meal instead of staggering your eating.

How to get food buffs in Valheim

To get the most out of food in Valheim, you need to maintain a varied diet. You will see three blank food squares to fill next to the player health bar at the player UI’s bottom left.

You can’t eat more than one piece of a food type at a time, and you will have to eat three different kinds of foods to maintain your buffs.

You also cannot continually eat. You will need to wait for your Viking to digest their food before you can feed them again. You can tell when they’re ready to eat again by seeing the food-squares in the UI flashing, making that food ready to be replaced.

Once the food stops flashing, you have lost the food buff completely, so it’s a good idea to eat again before the flashing stops.

Each of the biomes in Valheim will unlock an unofficial tier of food, which will give you food buffs appropriate to that zone’s relative monster strength. If you’re struggling as you enter the swamps or the plains, look around for food sources that you can add to your diet.

As you run into new ingredients, Valheim will automatically give you new recipes, so try them out. Some recipes depend on you cooking other foods, so have a go at making at least one of everything that turns up in your cookbook.