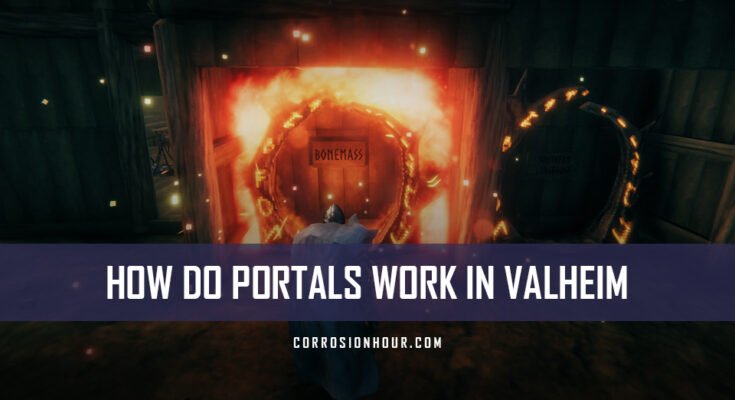 Build your very own Einstein–Rosen bridge

Popularized by the 1995 tv show Sliders, portals have become a mainstay of video games, and Valheim is no exception. As your Vikings cover more of the islands dotting the map of Valheim, you’ll need to be able to travel between locations quickly.

Boats are cool and all, but if you’re making multiple attempts against Bonemass or Yagluth, you’re not going to want to take a 20-minute boat ride both ways.

They’re also handy if you have an overseas mining operation. You can’t take the metal through, but you can duck back home to repair your tools and eat some lunch from time to time.

Placing a portal in Valheim

To learn the portal blueprint, you’ll have to pick up each portal’s building components.

With the materials and a building hammer in hand, right-click and select the Misc crafting menu, then portal.

The portal is a large ring that you can enter from the front or the back, but if you want to place it right the first time, the portal opens outwards from the side with the runic lettering.

Once you have placed the two portals, you will need to link them together. If you approach a portal and look at its frame, you will see the text “[E] Set tag.”

The tag is the code that lets two portals connect. A tag is a word you choose and is case sensitive. If you have a portal in the swamp, then name it something relevant like “swamp.” Name the portal back at your base “swamp” as well, and the two portals will connect.

You can only connect two portals via a tag; any portal after the first two will not connect to the same tag. Once your portals connect, they will light up a fiery ring of runes to let you know the portal is now active.

You can change tags as often as you like, and it won’t change the portal on the other end. If you’re at base and you change the tag from “swamp” to another portal, such as “meadows,” the home gate will change and can be changed back to “swamp” at any time.

There are several things to be aware of with portals in Valheim.

No metals, no pets

Unfinished metal cannot travel through a portal in Valheim. That includes metal sources, such as ore and scraps, and smelted metal, such as ingots. The portals don’t mind if you have crafted metal into gear—just no raw metal.

You also can’t bring pets or carts through a portal. Trying to bring a cart through will be dropped at the entry portal, and animals will stay behind. If you want to bring metal or pets home, it’ll have to be by boat.

Like all other base components in Valheim, you can destroy a portal with the hammer and get its materials back to place it somewhere else.

However, we have noticed that destroying a portal will only yield half of its resources back on occasion. We are not sure if this is intentional, but if you’re moving a portal on the far end, we recommend taking extra portal-building resources with you.

It’s common to have a few base portals back at home that you change to connect to different portals far away. It saves on resources and saves you space in your base.

Changing a tag is very easy, but it is important to note that changing a tag doesn’t change the portal connection instantly. There is also no visual change in the portal, i.e., It won’t close and reopen when you reset the tag.

If you change a tag and step into the portal before too quickly, you may get sent to the location that the portal’s tag had initially been. Which is now unconnected, so you can’t travel back.

If you change a tag, give it a second before stepping through the gateway.

We’re not 100% sure on this one, but any time the enemies have made it into our base or are near a base with a portal, they seem to beeline for the portals to destroy them. This tendency may be bad luck on our part. Regardless, enemies in Valheim are capable and willing to destroy your portals.

It’s not the end of the world as you should get the resources back, but as we said earlier, sometimes you only get half back. So be aware and possibly leave some extra portal resources on the far end.

The world of Valheim is massive, and you’re likely to cover a lot of it. We have portals connected to as many biomes as we’ve found, and portals set up near bosses when we want to go back and fight them again.

They’re cheap to make and easy to maintain, so get out there and build your network of portals, and wonder no more how portals work in Valheim. It’s time to make the most of Valheim’s massive world.