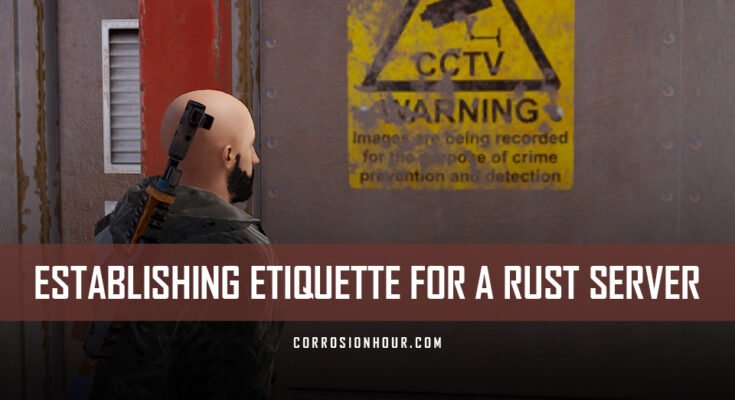 Get started with the ground rules

When it comes to RUST administration, many areas can make the job rather complex. Some admins’ responsibilities may be easier to enact because their duties and rules to enforce have been clearly defined in advance. In contrast, other admins may play it by ear and cross those bridges when the time comes, with no preparation or documentation to consult. Rather than hit every theoretical bump in the road during your time administrating RUST servers, we’ve put together this guide on establishing etiquette for a RUST server to help make your journey a bit smoother from the start.

What’s the difference between a good and a lousy admin?

To be able to see the difference between good, lousy, and outright ‘abusive’ admins, there are lines that server owners must define on their own before you can determine such characteristics. This process starts with communication.

The RUST server’s player expectations must be managed appropriately from the start and communicated clearly to the greater community. With such a wide array of servers available to RUST players, it’s important to distinguish what rules govern your server. Without a rule set laid out for all to see, enforcement of the rules can seem unfair to the player base.

Communicating the server’s rules can be done in a few ways:

Making sure to list and highlight expectations for behavior dictates not only how players should act while on the server but what they should expect, explicitly from the RUST admins and staff for that server.

Think of a server rules or information write-up as a contract between server owners and those they hope to attract to their community, for example:

To be clear, when taking on the burden of server ownership, new owners answer to themselves, the Facepunch Terms of Service, and when applicable, their server host. After the initial setup and when the server in question acquires its first outside connection, owners are implicitly expected to adhere (much like they have expectations of the game developer and their host) to similar guidelines as laid out in the developer’s Terms of Service.

As sure as the sun will rise, a community does best with clearly defined, properly worded rules. While it is a server owners’ prerogative to change format and rules as they see fit, so is the community’s responsibility to demand fair treatment and adherence by everyone to said mandates. Rules can be anything the owner wants but should be displayed plainly so that current and prospective players can access them. This two-way agreement is the baseline for the good/lousy admin distinction. Nothing kills a server faster than allegations of administrative abuse.

If a server owner elects to play the server they host, that is absolutely fine if the community is aware of it. Commands such as spawning items, teleporting, god mode, and other actions commonly deemed ‘admin abuse’ are detailed beforehand, and connecting players have reasonable expectations of what to look forward to. This guide does not condone the act of player abuse, but there can be no abuse if a warning is issued ahead of time and players choose to connect anyway.

All players and administrators alike are expected to adhere to the aforementioned Facepunch terms of service and report all incidents that conflict with its mandate to the Facepunch team via the F7 key report function.

Connection to a server under normal circumstances is entirely at the player’s will. So too, is the hosting of the server by the owner. Either party may terminate their connection at any time to free themselves of the obligation of abiding by the server rules/terms of service.

Rules are meaningless words on a server description, Discord channel, or website without consequences. RUST server owners should strive to be as straightforward about the cost of breaking the rules as they are in the rule itself. Clarity and conciseness for policy are essential, as RUST admins are expected to treat players fairly in matters that impact the community. Admins should also realize that breaking their own rules could lead to a drop in the community’s population or public allegations of abuse on their part.

While consequences can be whatever the server owner decides, there is a communal expectation of consistency and impartiality when dispensing punishment for breaking the rules (within the context of the incident). Be fair, and your server has a much better chance of success.

There’s a lot to consider before creating a RUST server. During the course of operation, there will certainly be more unseen responsibilities that will pile on. Still, if you can establish the etiquette for your RUST server from the start, the types of problems you encounter will likely be much easier to handle and guided by the work you put in early on, having managed expectations for both staff and players. For what little work is necessary for this step of RUST server administration, it’s worth every second of investment, as it’s a direct feature that will help impact your future success and allow the community to thrive.