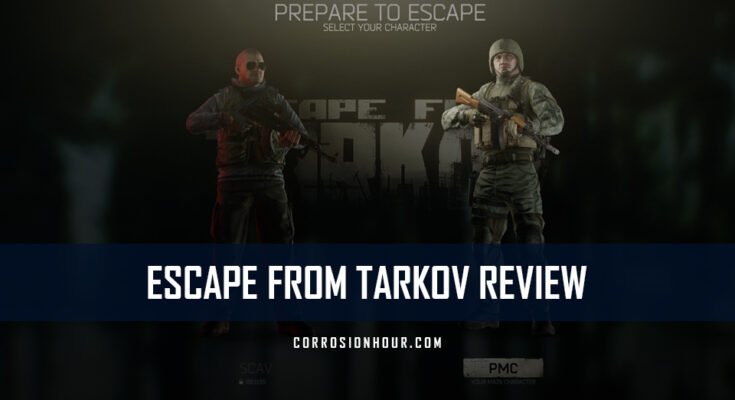 Dobro-Pozhalovat’ comrades, and welcome to the fair city of Tarkov.

You’ll find leaving much more complicated than arriving between addictive gameplay and the city under lock-down.

In development by the Russian game studio Battlestate Games, Escape from Tarkov (EFT) is a steady-paced first-person shooter with RPG elements. Reminiscent of titles such as America’s Army, this slower-moving tactical shooter has claimed a niche in the first-person shooter market that has long gone untapped.

Released in 2016 as an alpha-access title, EFT has been through many iterations of gameplay and settings. It stands firm enough to be enjoyed as it is, but the developers have goals that may see the title looking very different upon its official release.

The setting of Tarkov includes a complex plot, a woven narrative of state corruption, the United Nations, Russian militant forces, and two private military companies. Contained in a series of books by author Alexander Kontorovich, you will find a more in-depth story of Tarkov.

However, for those uninterested in international politics’ minutiae, the plot boils down to the need to escape… from Tarkov. After being locked down by the United Nations and the Russian military retreat, players may take up the role of a soldier from either of the private military companies, the USECs, or BEARs. 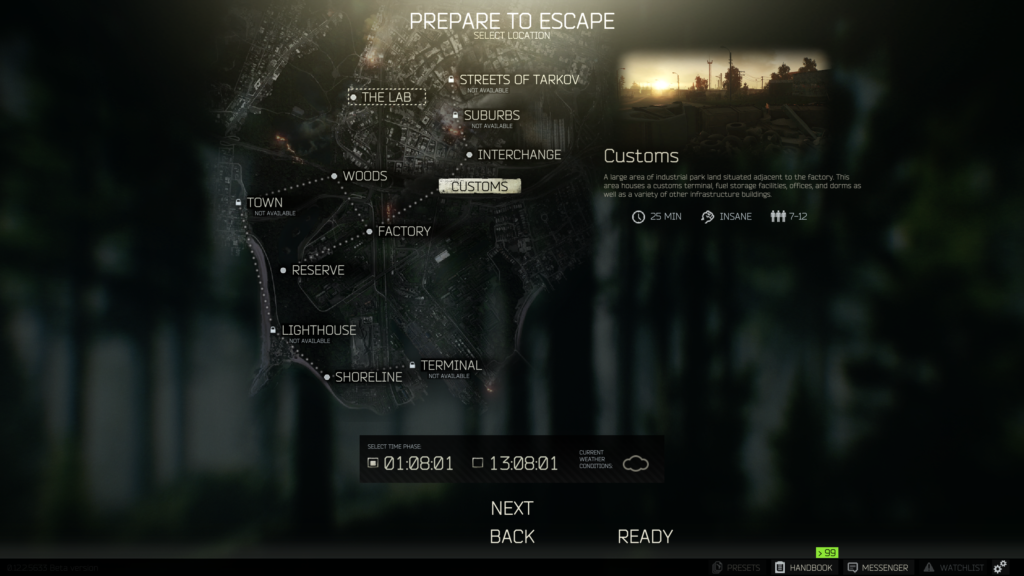 Alternatively, players can also take up the mantle of a destitute scavenger, defending the map from USEC and BEAR players while trawling through the scraps of the rundown industrial areas of Tarkov.

Built on the Unity engine, the graphics of Tarkov are stunning. Battlestate Games have done well to capture the feeling of a not-quite post-apocalyptic setting. Rundown and worn out, the city’s buildings show a lack of maintenance while the untended gardens run rampant. 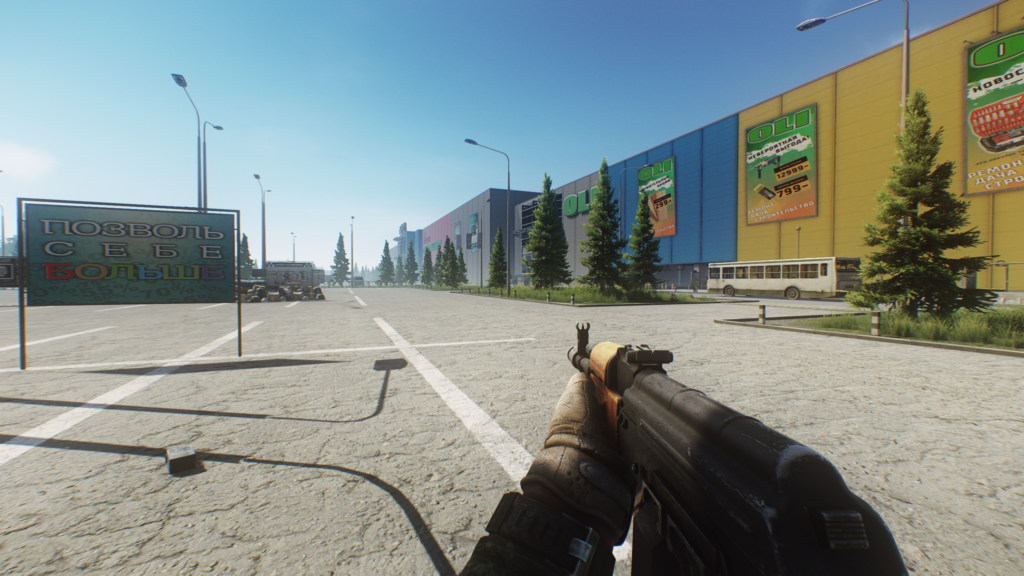 Much like the rest of the design philosophy, realism is at the heart of the visual experience. Lacking in the way of impressive set-pieces, the City of Tarkov successfully emulates the sense of a living city. Ordinary buildings, typical streets, it is certainly not an overly ‘fantastical’ world.

Not to say that the visuals are lackluster in any way. Quite the opposite. Highly detailed models and well-defined textures improve the world’s sense of realism. The lush forests and undergrowth succeed in giving both a sense of civil-decay and assisting in the essential gameplay elements of stealth.

The graphics quality exists at the behest of each player. With the graphic settings cranked up to eleven, it can be taxing for even the newest PC. However, if you’re ‘serious’ about first-person-shooter combat, a lower setting is recommended to keep your FPS matching your monitor’s refresh rate. 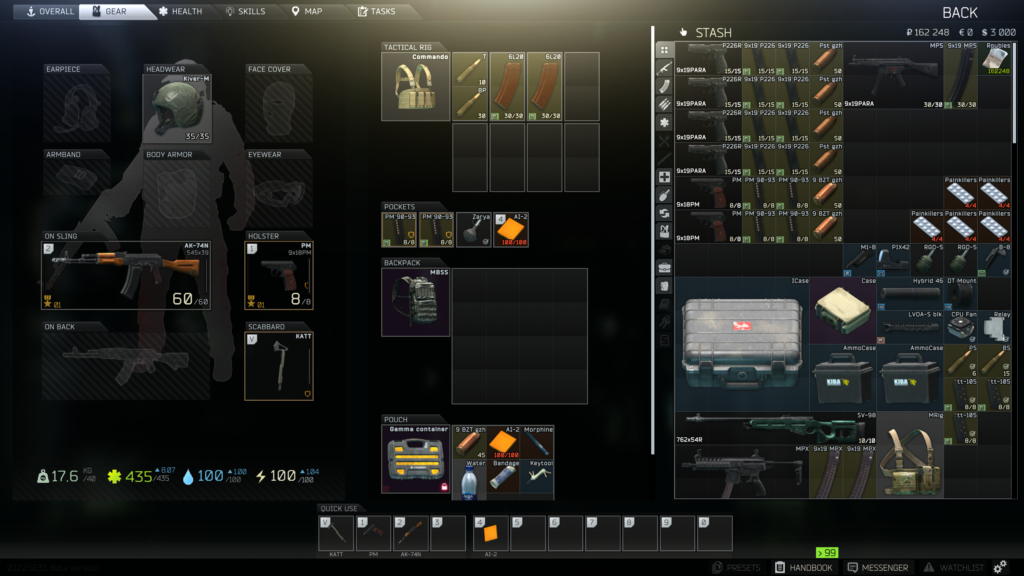 Fortunately, Battlestate considered that players would be using a variety of settings. While the graphics can scale substantially, there is little benefit to reducing settings beyond maintaining a high FPS rate. Bushes, trees, and thick grass are rendered from the same distance while retaining obscure players’ capacity.

The many weapons of Tarkov boast attention to detail. The weapons visually change as you add and remove components. Fans of guns and military equipment will not be disappointed.

As stealth features heavily in EFT, the sound design is continuously evolving to find new ways of delivering information to the player. If you’re moving through dense bushes, they’re going to rustle. Bumped into that barbed wire fence, and it’s going to shake, rattle and twang.

Footsteps differ depending on what floor material you walk on and at what pace you’re walking. The game includes military Comtac headphone sets, which reduce distracting noises such as wind, running water, and buzzing lights, effectively improving the player’s capacity to hear gunfire and footsteps. 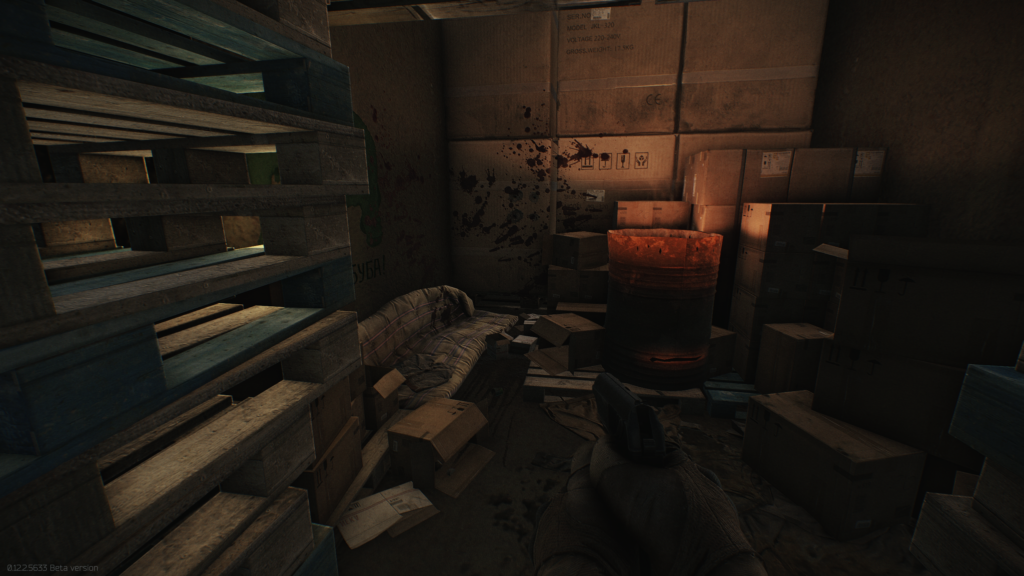 For all other purposes, the 360-degree range of sound works fine. However, without the scope of higher or lower sounds, a piece of essential information is lost. Despite this, it is crucial to remember that EFT is an early access title, and we’re yet to see what improvements might come down the line.

There is no soundtrack in Tarkov. The capacity to hear is too essential, although plenty of ambient sounds breathe life into the world.

The essential Tarkov experience is realism. Players are quickly exhausted when running, jumping, or climbing. Unless you are in the act of fleeing, the overuse of stamina is discouraged. Exhausting stamina also steadily drains your overall maximum stamina pool, which can only be replenished by eating, drinking, and resting your character. 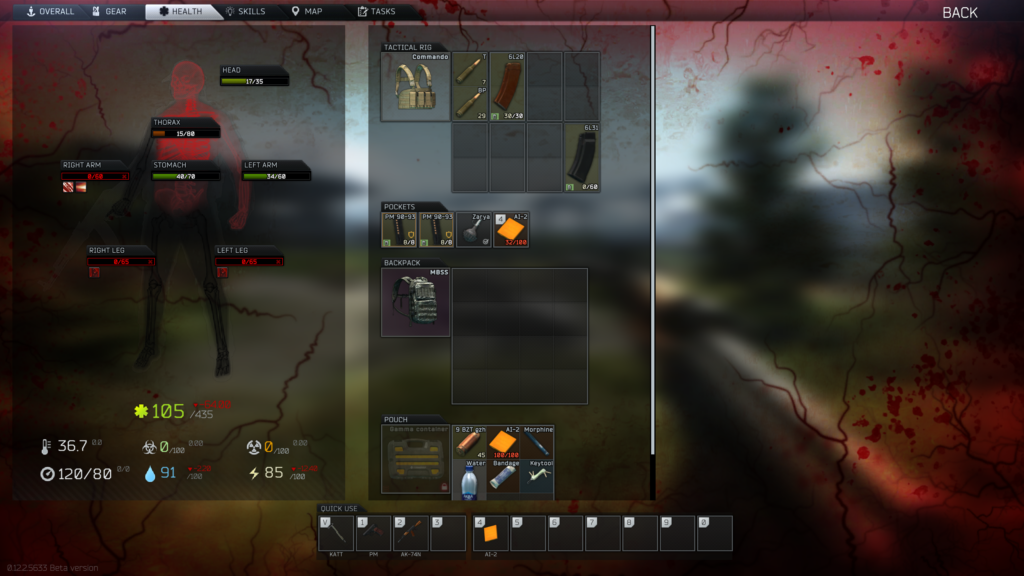 The skill-sets developed through games such as Call-of-Duty are of little use in Tarkov. Leaping through doorways and rushing around corners will be punished heavily by more patient players. In Tarkov, you are much more likely to succeed by quickly identifying the location of others and determining your opponents’ equipment and style of movement.

Many features of traditional FPS titles are missing from the UI. You get no information on how much ammunition is in your weapon, short of looking. You may pull out a clip and look at it, receiving only as much information as “almost half” or “nearly empty.” Much like a real soldier, it is down to the player to know your gun’s capacity.

Reloading takes a different stance too. If you have clips ready to go, you can switch them out quickly enough. But once you’ve worked through the clips you brought with you, you will now have to find a quiet moment to reload them, bullet by bullet. 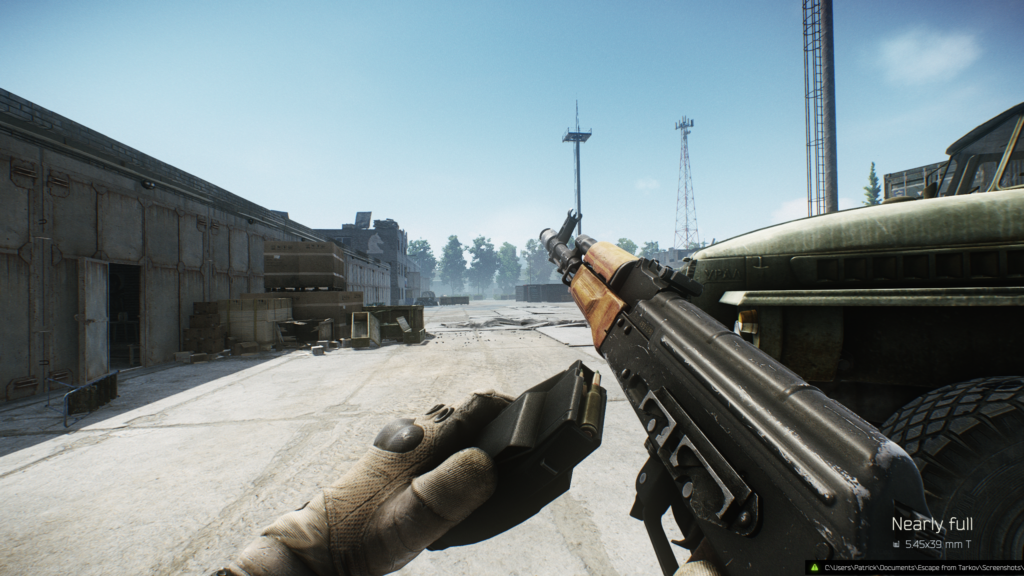 Displayed in a manner different than your typical health bar, Tarkov takes a unique approach to show the severity and location of received damage. Bleeding or broken limbs have other effects and require various medical tools to be repaired. Have you fractured your shin? I hope you brought some splints. Were you shot in the gut? Better stitch that up. Wounds to the head significantly impact the player by bringing on ringing ears and dizziness.

As well as needing the resources to mend wounds, you also need to find the time. In the heat of battle, it is difficult to stop and stitch up an injury. Therefore, players are continually questioning whether or not to continue the fight or try and find a route of escape. How long can you let the fluids from your stomach pour onto the ground? The answer is, not long.

Players’ equipment is genuinely their own. You must purchase or find the things you want, and anything you bring into a raid can be lost or looted off your corpse when you go down, with one exception. A small container can store a few essential pieces of loot and gear not worth risking.

When you’re not busy fighting, scavenging, or bleeding to death on the battlefield, players will find themselves playing Tetris with their limited inventory. Escaping with the best loot is one thing. Finding somewhere to put it on the shelf is another. 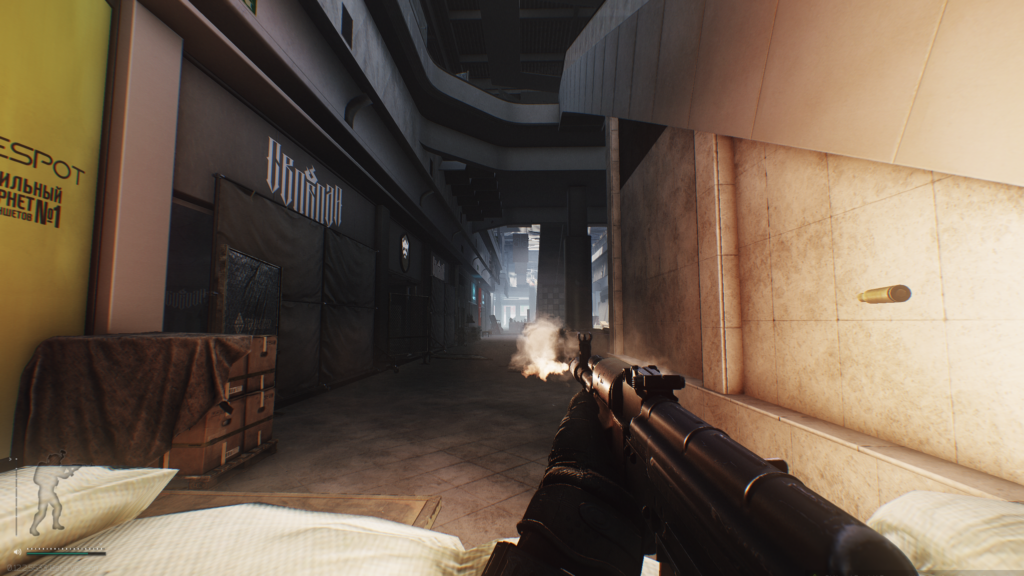 Given an upgradeable hideout, players can store their hauls. Rest, recover, and put the materials brought back from raids to work by finding enough bits and pieces throughout Tarkov. Before you know it, your crib will go from dirty rags on the floor and a bucket for a toilet to a veritable bachelor’s pad.

For the time being, players deploy into raids from a menu. You get to choose a night or day raid on several primary locations around Tarkov. As such, you will find yourself replaying these raids often, depending on what your objectives are—completing quests for the vendor NPCs, scavenging for something to upgrade the hideout, or merely looking for people to shoot.

The developers intend for the world to eventually be an open-ended sandbox, with no loading screens beyond leaving your hideout. But the game is more than playable in its current state.

Closing thoughts on Escape From Tarkov

Once a player becomes accustomed to a much slower-paced shooter, the combat is highly rewarding and satisfying. Without a doubt, EFT is an excellent game. It suffers only from the bumps and hiccups common to early access titles. 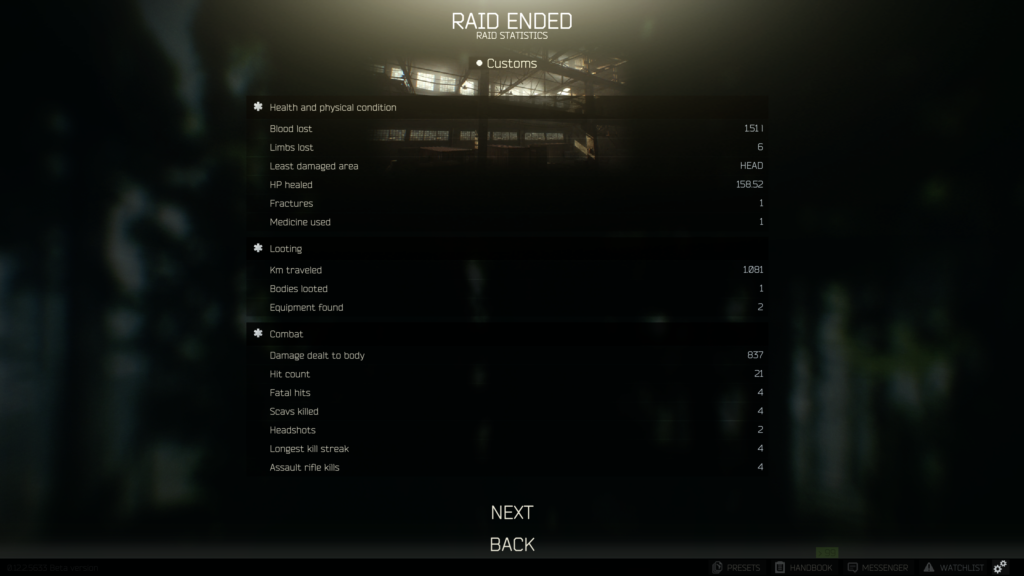 At present, there is some desync between players, assets not fully optimized, and troubles tweaking the difficulty of the AI scavengers. These are all issues that can be addressed with time but are apparent in the current build.

Fortunately, the developers are relatively vocal through the Tarkov forums and subreddit and are consistently working towards addressing these issues with each patch.

So get over the gear-fear, choose your favorite guns, and step onto the streets of Tarkov. You’ll either be leaving all that loot behind or taking someone else’s home with you.