Frightening gameplay and appreciation for Wilson’s ability to grow a magnificent beard.

Don’t Starve not only leaves its mark, but it does so in style with its incredible visuals.

Every survival game has a unique hook when it comes to engaging players. Some games manage to incorporate survival horror elements and base building to keep people coming back. Others add crafting, harvesting, or managing resources to the mix.

With so many ways to innovate within the genre, Don’t Starve goes down the route of adding procedural generation and aesthetics that are sure to please fans of Klei’s prior work.

In a dark and lonesome cabin deep in the woods, our intrepid gentleman scientist, Wilson, worked on another one of his inventions. It wasn’t long until Wilson’s project failed in a comedic fashion, leaving our hero more than dissatisfied.

A box within Wilson’s lab spoke up and offered a gift: knowledge far beyond human comprehension. With a flash of lightning upon an ominous shadow, Wilson held up the box and was enlightened. He immediately got to work and built a giant machine.

Once he finished, the box urged him to throw the switch. As Wilson did just that, the box laughed maniacally and shadowy hands pulled Wilson away into another realm. Now with a newfound determination, Wilson is forced to survive in the unknown wilderness.

Don’t Starve’s concept is this: you’re thrown into a surreal wilderness where fantasy monsters abide with nothing but the clothes on your back. Don’t drown. Don’t get eaten. Don’t starve.

Being forced to learn how to manage resources with little to no indication of what to do is Wilson’s plight in a nutshell. The story itself mainly occurs at the beginning and end of the game when Wilson and the voice in his box take center stage. But the surprises hidden throughout the macabre lands of Don’t Starve have their own stories to tell.

Don’t Starve’s introduction does an excellent job of establishing some of the dark frights that the player will contend with. Wilson himself shows us the dangers of experimenting and interacting with objects we are unsure of within the game world. While also simulating a typical player’s reaction to finding a new item.

The shadowy hands tie into one of the game’s main mechanics, which involves taking care of the player’s sanity. The box’s voice also shows us our antagonist known as Maxwell, which players slowly get to know by exploring the world around them.

Overall the story functions as a backdrop for the exciting world to explore and offers supplementary information for those seeking it.

Don’t Starve’s unique visual style quickly hook us into its compelling universe. As fans of the odd and the strange, the Tim Burton-inspired graphics only added to our appreciation of the game. The hand-drawn-inspired art style gives each character their distinct flair. 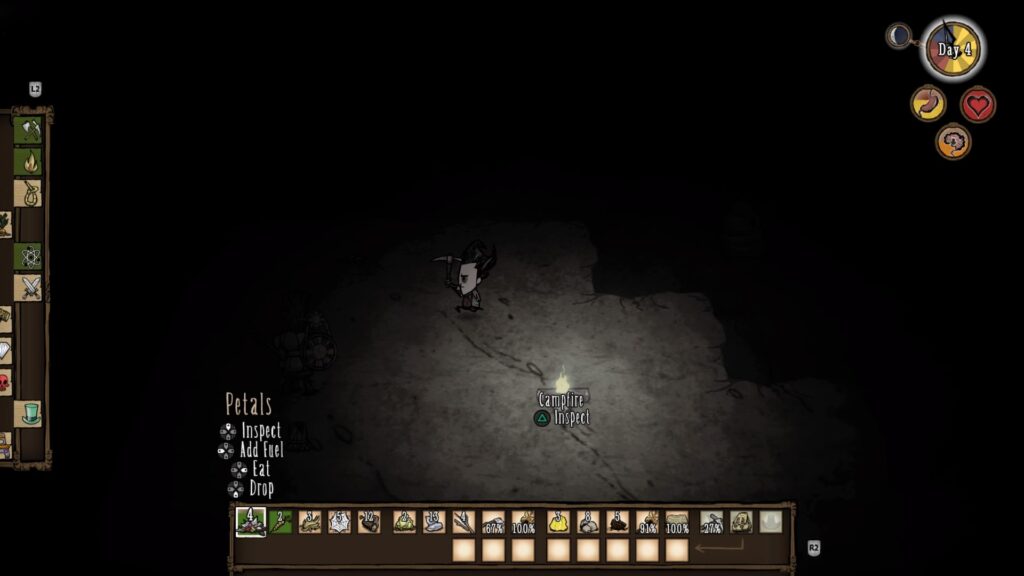 Little details such as the birds lightly hopping around or the way trees gently sway in the breeze make the danger feel less intimidating. Other visual effects, such as seeing fire spread or the moving ocean waves, contribute to the wilderness’s dynamic nature.

Characters offer a plethora of varying animations and reactions to different objects throughout the world. One of our favorite animations is seeing the lumberjack character, woodie, transform into a giant werebeaver. In combination with the art style, the clean animations are indeed a treat to see in motion.

Don’t Starve thrives in making the player laugh in whimsy with its sound design and shriek in terror when appropriate. In particular, one detail is when a character speaks, their voice will be represented by different instruments similar to the Adults from Charlie Brown when they talk. Willow, for example, has a flute for her instrument choice, which is a stark contrast to her pyromania problem.

Tied to the sanity mechanic mentioned earlier is another beautiful example of sound design. When the sanity meter gets low, the player will eventually hear eerie noises that will obscure other audio in-game. The lack of sanity also manifests itself in shadowy monsters during the daytime, which further contributes to the unsettling atmosphere.

Forced by the darkness of night, players must provide a light source, lest the unseen foes from the shadows finish them off. The shadowy hands from the intro cutscene also make their return. If a player tries to make a campfire to survive the night, the hands will slowly creep into view while a music box plays alongside them. 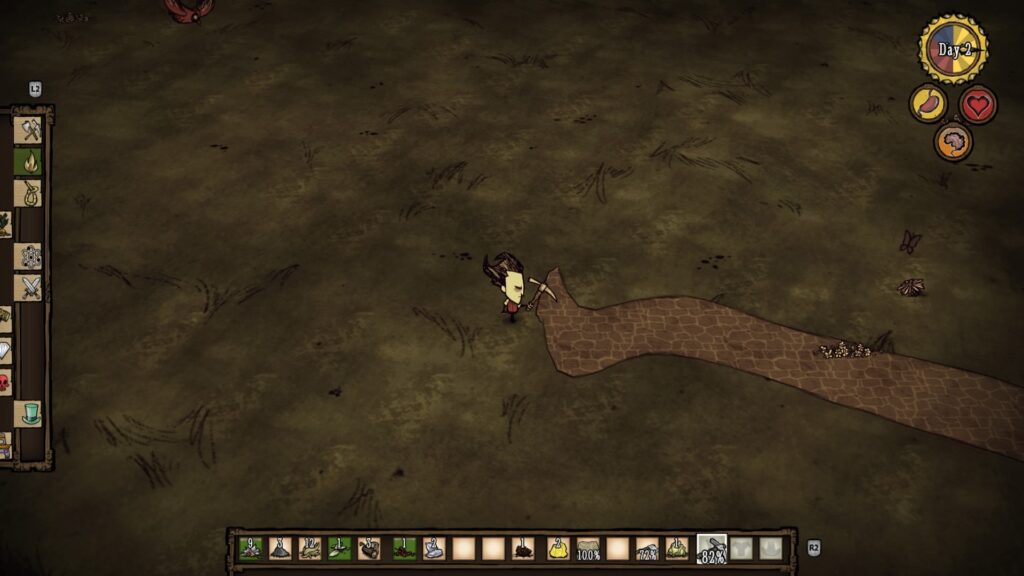 Don’t Starve manages to quite literally make the player feel as if they have survived yet another sleepless night, and all this is thanks to stellar sound design and a delightfully creepy atmosphere to accompany it.

Like other survival games in the genre, Don’t Starve thrusts players into a massive world with options galore for the player to engage. The game’s goal is simple, survive as long as possible, but that doesn’t mean there aren’t hurdles to overcome!

Many new players will find themselves scavenging for raw materials such as grass, sticks, and rocks to create new tools. These tools are mandatory to start crafting some of the higher-tier amenities, such as a better campfire or even a science machine, which gives even more options for resourceful players.

The day-night cycle switches things up by making nights last longer than days. As if that weren’t enough, players will also have to keep the different seasons in mind, ultimately dictating what strategies are viable.

Summer has the player needing to find ways to cool down by wearing certain pieces of clothing. Heatstroke is no joke, folks!

Spring will have an abundance of rain, which is excellent for crops but comes with its share of issues. Fall is arguably the bunch’s tamest as there are no extreme weather effects to concern the player.

Then there is Winter, the most challenging part about Don’t Starve. Winter demands that the player stock up enough food before the season as crops don’t grow due to the chill, and similar to summer, you’ll need appropriate clothing.

Each of the seasons also has unique enemies, which further contributes to how dynamic the game is.

Don’t Starve is built around the idea of procedural generation, but it also offers an adventure mode where players are required to play around with specific challenges.

The adventure mode gives us a bit more insight into Maxwell’s character and provides the player with a goal aside from merely surviving as long as possible. With several chapters and much more incredible difficulty than the base game, goal-oriented players will have something to look forward to in Maxwell’s twisted world.

The learning curve alone within Don’t Starve is what kept us coming back into its magical world. It’s the kind of game where you feel like you’re always improving, and that’s thanks to how the game design feels incremental. 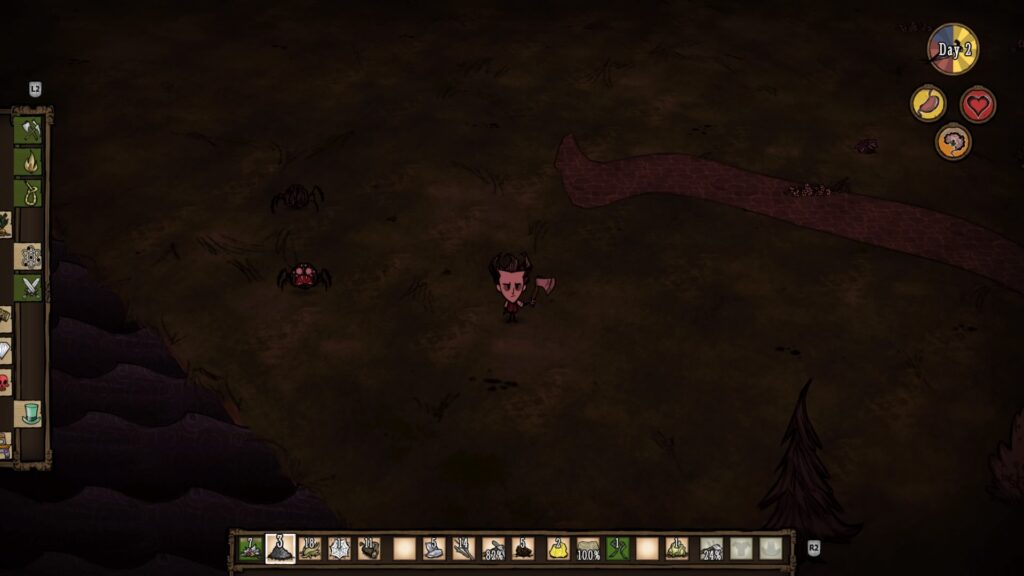 One run, you may wind up focusing on farming which can teach you how to make crucial resources self-sustaining. On other runs, you may wind up trying your hand at necessary foraging skills such as hunting and fishing.

Everything the player does has its reward tied to it but knowing when to do it is critical in determining how long you will live. With an abundance of downloadable content linked to the game, Don’t Starve is sure to keep players entertained for many hours, let alone its multi-player sequel, Don’t Starve Together, is available.

Don’t Starve is one of those games where we found ourselves deeply immersed. Five hours would pass by in the wink of an eye. It’s an experience best left too late at night where you start to wonder if the eerie sounds you’re hearing in-game are creeping outside the window.