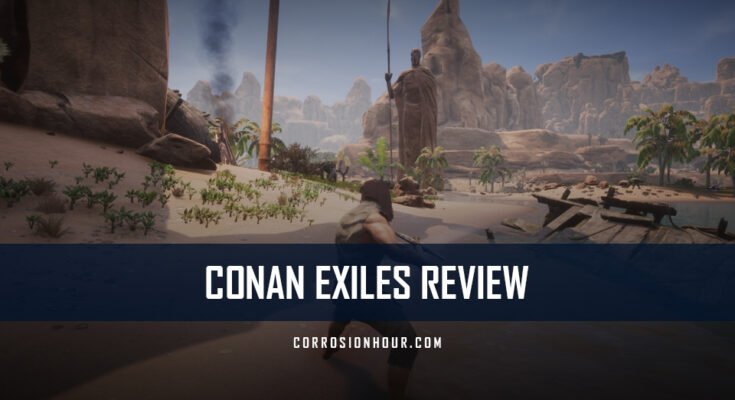 Want to crush your enemies? See them driven before you? Hear the lamentations of their women?

What luck! As Funcom’s survival crafter Conan Exiles, set in the Conan of Cimmeria universe, it lets you do just that. Take on the role of the muscular meatheads and voluptuous women gracing the covers of paperback fantasy novels since the ’50s. Venture into the Exiled Lands. Pray to Crom if you’ve got the tongue for it; he might be listening.

Crucified and left to rot in the Exiled Lands, the titular hero Conan the Barbarian comes to the player’s rescue. Terse as ever, Conan will waltz off into the desert, leaving you with barely an enigmatic explanation as to where you are or from where your cool new bracelet came.

Nifty as your new accessory is, it marks the exiled. Better known as a prisoner who committed a crime so heinous, you now live beyond the exiled walls. Returning is ‘impossible,’ as you and all your cellmates might discover. Instant death is the price for a cursed one who tries to climb back over those walls.

Since you’re here twenty-five to life, you must make the best of things. Build a home, meet the locals, get to know the area. It’s a shame a good number of the locals are cannibals, mad cultists, or beasts from beyond imagination. 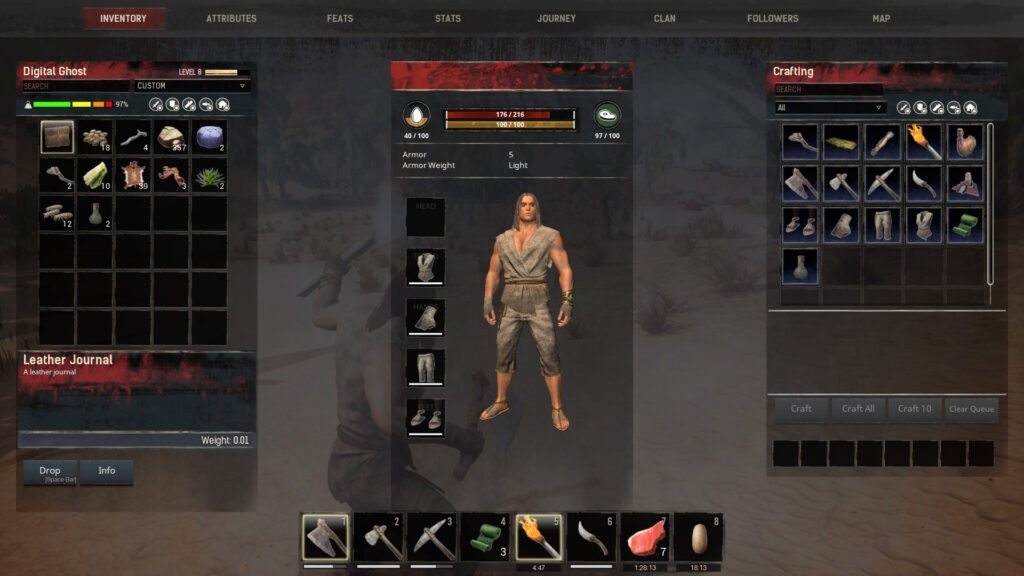 As you gather, build and progress your skills, you must contend with other players, numerous NPC factions, dangerous beasts, and the environment itself. But hey! Since everyone else is being a jerk, you can be a jerk too. Enslave others and whip them into servile thralls, have them assist you in base building, survival and combat.

Were slaves not enough for you? Put the dark-gods of the land to work. Sacrifice enough slaves or players to your god of choice, and an avatar of their strength will come, laying waste in any general direction you point them.

As you make your way through the world, expand your claim on the land, and explore the dungeon’s depths of darkness and depravity. Down there, you will find clues to solving your bracelet problem. Maybe the curse of the exiled isn’t as unbreakable as it’s cracked up to be.

Conan Exiles’ graphics are well-rounded, neither overly photorealistic nor too cartoonish. In a healthy middle point between caricature and honest rendering of the biomes, the world feels like the perfect setting for a Conanian comic-book fantasy adventure.

Your story starts in the driest desert you have ever seen. The game world opens up to savannah and rocky terrain reminiscent of Nevada’s Red-Rock-Canyon.

Rich blue rivers contrast the bright red and orange landscape, acting as a reprieve from the sense of dryness in the world around you. Travel further north to find fog-ridden Norse-kin forests, frozen mountains, and tundra. 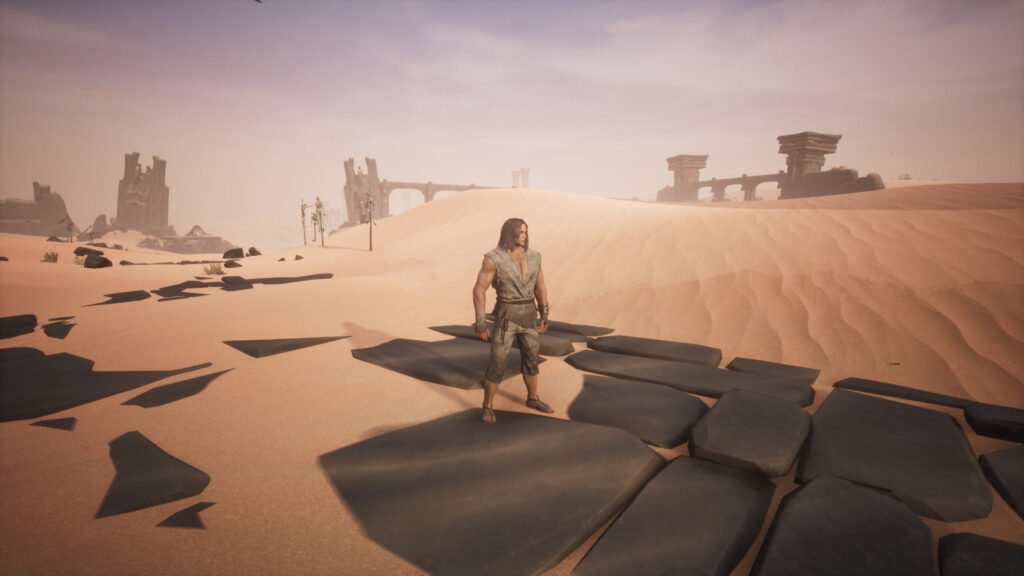 To the east are the lush jungles, which accurately capture the essence of humidity and warmth that pervades such places.

Enemies of the humanoid variety do start to feel a little samey after a while. Cultists, cannibals, Nordic warriors all have different tailors, certainly, but unique faction animations would have been a treat.

However, the beasts and monsters of the land are a sight to behold. Modeled quite cleanly and animated well, the creatures capture the essence of what they are. Giant spiders are suitably spidery with creepy unconventional movement. The ancient beings lumbering through the north’s forests draw inspiration from ancient myth and are appropriately epic in scale.

The world hosts many mythical enemies, from imps, the undead to dragons, and more. There is an excellent variety of unique creatures to keep the player occupied while taking in the exiled lands.

The rich settings compliments a rich cinematic soundtrack, bespoke to the areas you travel through. While a good soundtrack can make or break a game, this is one case in which players may have to choose between an epic soundtrack or the capacity to hear their surroundings.

Conan Exiles’ take on the survival genre is one of power fantasy between the music, the rolling vistas, and the swarm of enemies facing you. You are rarely afraid of what’s ahead of you. We often found ourselves standing on the mountain overlooking the place we had just conquered with pity before heading home. 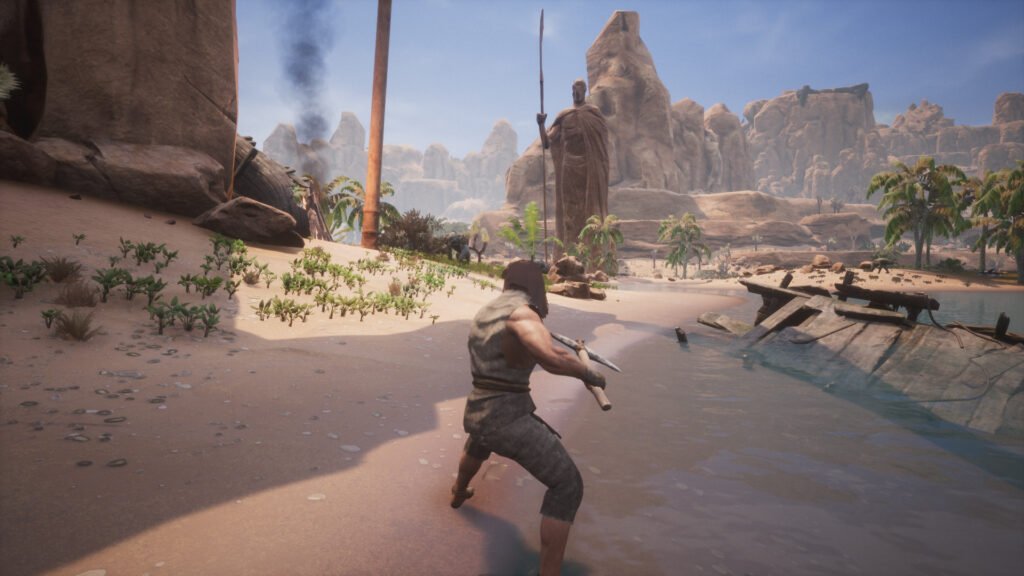 While this might be considered a shortcoming for some titles, it works for a game in the setting of Conan of Cimmeria. Brute strength is the name of the game, and the player characters have it in spades.

The combat is fast-paced and action-oriented. Dodging enemies with rolls or moving in to strike a variety of weapons feels responsive and impactful. You can tailor your combat playstyle by choosing specific weapons and armor classes.

The range of weapons is mostly available from the beginning of the game, with all weapons progressing upwards through material tiers at approximately the same rate. Both one-handed and two-handed variations of axes, maces, spears, and swords are present. Shields, bows, and other projectiles are an option for those more inclined to play defensively.

On top of gear choices, player characters will level up, unlocking points to distribute throughout various stats. Make the right choices, and you can fight longer, hit harder, or run from the fight quicker. 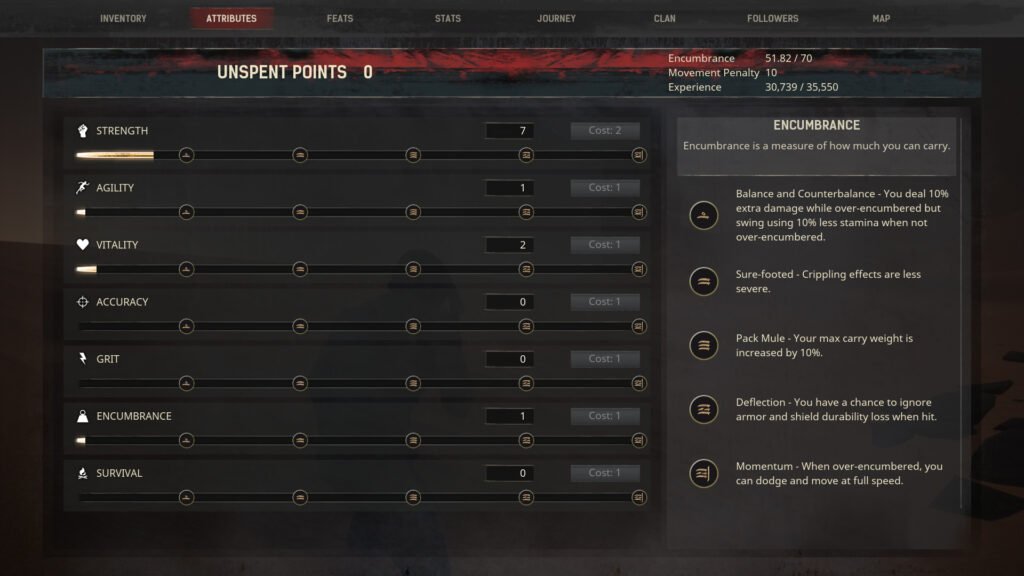 The same stats can also affect the traveling and collecting aspects of the game. Climbing up mountains and ledges is significantly affected by your Grit. You can live longer on less food by improving survival.

Need more room in your inventory for lugging base around building materials? Throw a few points in encumbrance. Sufficient points in any stats will open up perks and bonuses to your combat and survival skills.

Running and climbing will consume most of your time, lucky too as they’re both quite fun. Finding ways to stretch your stamina as long as possible to reach that tricky mountain peak becomes a game in itself.

Once you find time to settle down, Exiles takes a more traditional approach to survival crafting. There are three tiers of buildings, sandstone, stone-brick, reinforced, and a few tool creation levels, namely wood, stone, and steel.

Gather and build the basics, make new workbenches to improve on what you’ve built. However, there is an added dimension of slavery. Through this less than ethical mechanic, you can entrap the exiled land locals and force them to do your bidding.

Have them service your chosen gods as priests, guard the walls, dance for you. Whatever you desire, the slaves don’t get a choice.

Your home is an important place, primarily for loot storage and defense. It shields you from the elements on excessively hot or cold days and can hide you from the devastating sandstorms which plague the land.

Bases and compounds double as defensive perimeters from the purge, which is not always active on every server. When it is functional, intermittently, a horde of enemies chosen from the various types will rampage across the land, destroying all player-built structures they can get their hands on.

Once you build your home and enslave your slaves, there is much to do in the world. Find the caves which house bosses or run through the local dungeons. Travel to the decaying ruins of dead cities and fight through a horde of undead.

Major bosses play a part in the world and the story too. Players will have to take them on to unlock emotes, gear customization, and pieces of the puzzle in the quest to escape the exiled lands.

As with most survival crafters, the Conan Exiles servers are prone to wiping at various times. Some players like the long wipe, which can last up to months, while others prefer hard resets often. 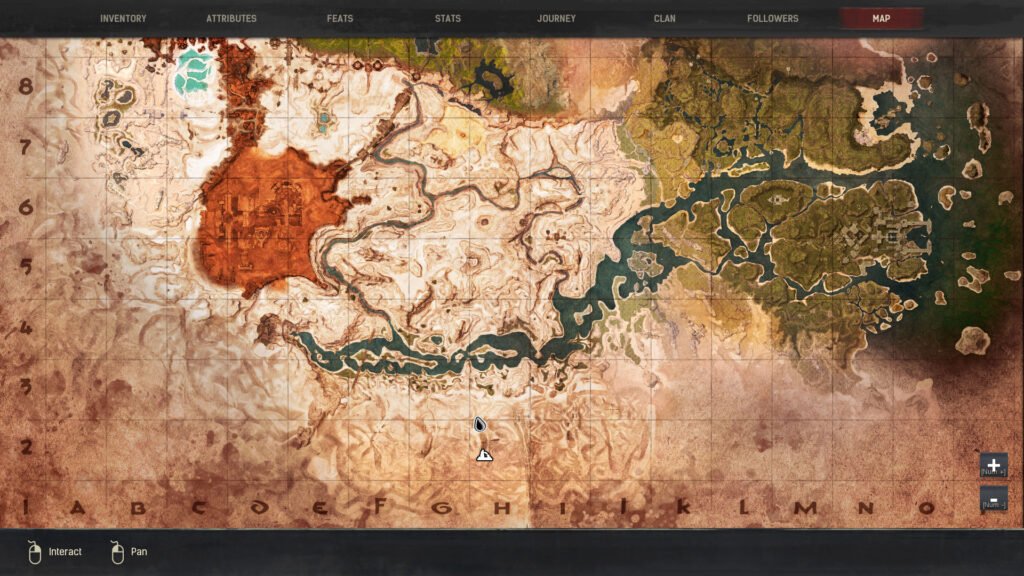 Since Funcom is open to player-run servers, there is a server out there catering to every player’s whim. Don’t like the gathering grind too much? There is a 500 times gather server out there with your name on it. Not a fan of PVP, more than a few servers have it turned off.

Like any survival-crafter game, Exiles has near-infinite replayability. Building somewhere new, trying a new weapon class, or even playing on a different server can open up players to a wide variety of new experiences.

While it carries a unique style, it doesn’t bring much new to the table beyond the capacity to enslave NPCs. Conan Exiles doesn’t lack content; instead, it takes the genre’s fundamentals and executes them well. Exiles lives up to the source material’s expectations for those familiar with the Conan the Barbarian setting. All the while presenting an environment that requires little to no background knowledge to enjoy.

The Conan the Barbarian setting is rich with lore and fun for hunting monsters and men. All in all, Conan Exiles is a substantial addition to the roster of popular survival-crafting titles.