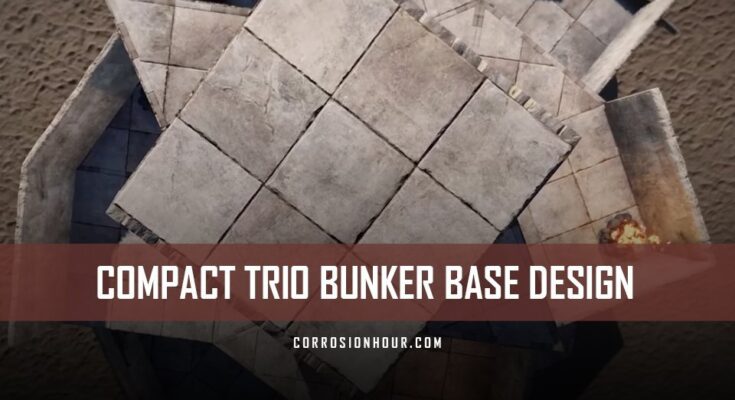 This RUST base design video, the Compact Bunker Base, is brought to you today by our partner xRaw. This base is designed for vanilla servers and supports up to a trio group.

Bunker entrances allow players to create low resource investment bases with a high return when it comes to required raiding resources. Bunkers often take advantage of game flaws and allow players to build them into their overall designs.

Hey guys, and welcome back to another video. In today’s video, we’re looking at RUST base design that goes from a starter to a main base. This base is a solo to trio base and contains features such as compact item placement, roof access and a bunker entrance.

Just before we get into the tour, I have a discord channel which will be linked below for anyone wanting to join.

To start off with, these are all of the items within the base. We have a campfire, 9 shotgun traps, 22 barbecues, 3 sleeping bags, 25 small boxes, 16 large boxes, 6 furnaces, tier 2 workbench and your tool cupboard. All of the barbecues, small boxes, and large boxes mean you have well over 34 large boxes worth of storage inside your base.

Heading over to the base here, we have these roof pieces to get up to the entrance. You can swap these out for a more secure entrance if you prefer. We then have these shotgun traps at the top to try and prevent people from camping your entrance. Some people may not spot these and, when running up, may give you some free loot. I’ve also added low walls all around the top of the base to make it more defendable. you can remove these or build further on top to increase the defense.

On this side of the base here, we have your tier 2 workbench and sleeping bag, as well as 2 loot rooms. Each of the loot rooms holds 4 large boxes, 8 small boxes, and 6 barbecues equaling about 10 large boxes worth of storage per loot room. Swap this out for whatever suits you best.

On this side of the base, we have another loot room, which holds 4 large boxes, 8 small boxes and 6 barbecues, followed by a sleeping bag and 3 furnaces before reaching your final loot room which has slightly less storage but allows access to the tool cupboard and another furnace.

The footprint of the base is simple. Starting with a square and two triangles for your starter base, before expanding out to add all of your loot rooms, and then again for the bunker entrance and finally the honeycomb.

Breaking down the raid cost, this is the cost to raid to the TC. Then, this is the cost for all of the loot. This base is going to cost you 6.8k metal, 5.7k wood and 22.5k stone with an upkeep cost of 1.8k metal, 4 wood and 3.9k stone. A more detail costing can be found in the comments to include deployables.