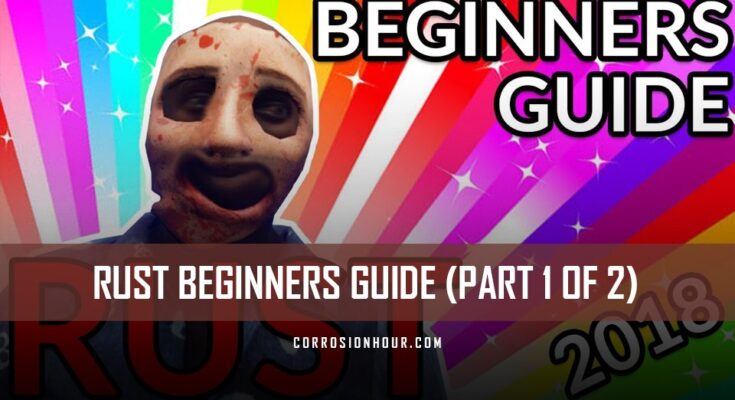 This RUST beginner’s guide has been crafted by our partner Malonik.

His 2 part video series fills in many areas that haven’t been updated by other beginners guides.

If you’re a new player to RUST in 2018, this RUST beginner’s guide is certainly worth watching from start to end. You can quickly bootstrap yourself into the world of RUST, albeit, there’s a never-ending amount of things to learn. So keep digging through RUST beginner’s guides and be sure to give these videos your full attention.

Welcome to the rust 101 beginners guide! With an influx of new players from the Christmas sales and more on the way with rust leaving early access, I wanted to put together a guide for people that are new to rust.

Something that will help you get over that rust learning curve without the brutal and harsh lessons that usually go along with that.

Startup rust and you’ll be greeted by this screen. Feel free to ignore this screen for now and instead click this little play game button here. This is the server browser. As you can see, there are thousands of servers to choose from. On the left you have the different types of servers and on the right,  you have the servers in that type.

Official servers provide the vanilla rust experience and they’re hosted by Facepunch or by communities that have been around for a veeeeery long time, such as Rustafied and Rustralasia. Community servers are unofficial servers that are run by people or groups in the community. They can be vanilla however they can also tweak server settings, which is usually done to make the game easier.

Modded servers are also unofficial servers that are run by members of the community, however they have mods which in most cases drastically change the game play experience.

Official servers are usually monthly unless it specifically says otherwise.  Additionally, some servers have limitations for example solo/duo/trio which means you can only have up to 3 people in your group.

Read the server names carefully and click on a server to get more info about it to ensure you’re picking a server that suits you.

Ultimately I’d avoid modded servers initially as picking the wrong one will give you a very skewed experience of rust. I’d definitely recommend checking them out, but perhaps later down the track.

Now you know the differences between the server types; but just before you decide where to start, there are a few other things we need to quickly cover. Rust servers wipe regularly, servers will either be weekly, fortnightly or monthly and servers usually wipe on Fridays.

Servers can not exceed 1 month because there’s a forced wipe on every server which is usually the first Thursday/Friday of each month.

Once you have figured out which server you want to play on, it is time to connect to it and get started. When you first get in you’ll wake up on a beach, bare ass, junk out and holding a rock. Now just quickly you can hold left alt to look around, shift is sprint and you have unlimited stamina.

Now your rock is great, but it is not going to protect you from much. Find a tree and start whacking it with your rock. You’ll notice in the bottom right you’re getting wood each time you hit it.

After you hit it once you’ll see a spray-painted x, hitting those will gather the wood faster.

Hit tab to bring up your character screen, on the left is your character, stats and gear. In the middle you’ve got your inventory and hot bar, over to the right is your quick crafting and up top is a crafting button to take you into the full crafting menu or you can just hit q to get in there.

You should see some wood in your inventory from hitting the tree. Keep hitting trees until you’ve got 300 wood then use the quick craft to make a spear. Congratulations, you’ve just crafted your first item in rust and can now defend yourself slightly better.

Okay, so next you need to learn about the basic resources in rust. Currently there are two things that you want to start farming, wood and stone. You already know how to get wood so let’s take a look at stone. This is a stone node, hit it with your rock.

Instead of spray painted x’s like with the trees, these nodes have a sparkle that will gather it faster. You can also find little bits of wood and stone like this which can be picked up off the ground.

Once you have some wood and stone, jump into your crafting menu and make a stone pickaxe and a stone hatchet. These primitive tools are going to make farming a hell of a lot easier. Now keep farming wood and stone and while you run around farming it’s worth keeping an eye out for these plants. This is cloth and you are going to need it for a lot of things.

Now you’re farming to build your first base! How much you want to farm is up to you. I’d suggest a few thousand wood and 3 or 4 thousand stone, don’t worry it isn’t as bad as you would think.

Keep in mind that at any moment you might run into another player and if they kill you then you have lost everything so don’t go too crazy with the farming yet, especially if you are on a busy server or if the server has recently wiped.

While you are farming, press q, craft a building plan, hammer, wooden door and a key lock. They all just cost a bit of wood and you are going to need them to build your base. Also keep an eye out for somewhere you would like to build.

Once you are happy with the wood and stone you have farmed find a place that you want to build, because it’s time to build your first base!

Open your inventory, if it’s not already there move your building plan to the hot bar, if you hold right click it will bring up an options wheel that has all the various building pieces you can place.

Next build your walls, now here is where a lot of new players go wrong. There is a back and front to walls. The back of a wall is weaker and much easier to break than the front. You can tell which is which by how it looks, the back has wooden beams running across it whereas the front is more smooth, the same goes for doorways which we will do next.

If you place a wall the wrong way around you can get your hammer out, hold right click and rotate it. Keep in mind that you can only rotate them for a short while after building or upgrading them so make sure you have your walls the right way sooner rather than later.

Lastly swap over to ceiling and triangle ceiling and put a roof on your base like this. You now have the floor plan for your base laid out however as it currently stands it is still very easy to break in seeming as the twig is very weak and you haven’t put your door on.

Get your door out and put it on the outer doorway. You can change whether the door opens inwards or outwards by moving to the left or right. You want the door to open inwards and we will cover why in a second.

Now put the key lock on the door, hold e and lock the goddamn door. Do not create a key, not even for your friends. If your friend dies out in the wild to a player, the key can be taken, and folks can walk right in.

Now get your hammer out and start upgrading your base to stone. Hold right click with the hammer while you’re looking at what you want to upgrade like this. You want to upgrade everything to stone but if you run out of stone then wood will do for now. That being said if you do have to use wood make sure you farm more stone and upgrade the wooden parts as soon as we’re done here.

Right, so now your base is far more secure however you will notice that in the bottom right there is a red notification that says your base is decaying. This is because you need a tool cupboard with resources in it to maintain your base.

Press q, craft a tool cupboard and put it down in the corner. Now authorize on the cupboard, open it up and it will show you what you need to maintain your base which at this point will be wood and stone.

Put your wood and stone in there and it will show you how long it will last. Without the proper materials in the cupboard the wood stone or metal walls will slowly lose health, and an empty cupboard means your base will disappear within a few hours.

Make sure that you keep the cupboard stocked and happy otherwise you will log back in and not have a base.

Now craft another key lock, this one is going to be for the cupboard. Now, in the event that someone gets in your base they can’t authorize on your cupboard or open it and steal resources without destroying it.

If you run out of mats while doing any of this you can run out and get more, but ideally you want to get all of this done asap to make sure you are secure.

Now you are ready to get out there and get involved. But before we finish remember how we made the door open inwards? Let’s take a look at that. When you open your door, notice it opens into your second doorway blocking anyone from getting through that doorway.

That means if anyone is hiding outside your door ready to kill you the second you open your door, they at least can’t get inside your base. Ideally you will eventually add a second door which you will close before opening the front door but, in the meantime, this will work to keep your base safe from door campers.

My last piece of advice is to be very wary of trusting anyone you come across and bring your loot back often if you don’t want to lose it. Now get out there and explore the world of rust!!

If you enjoyed this video or it helped you, please leave a thumbs up and comment so i know and i will continue this series and teach you more about rust. Also, if you don’t want to miss my content subscribe and click the little bell so you get notified when I release new videos! Thanks for watching and I’ll see you guys next time!