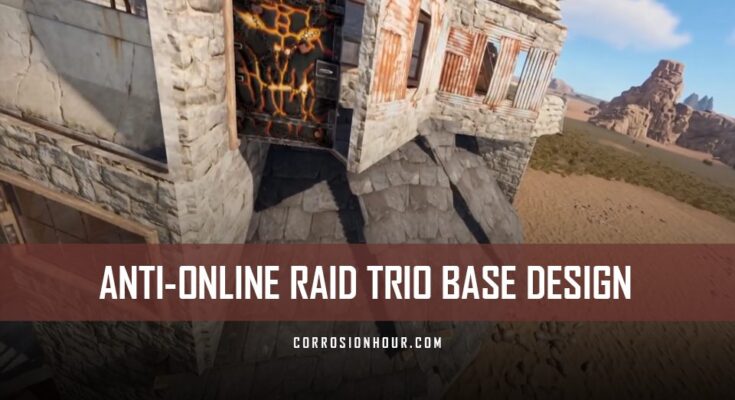 The Anti-online raid trio RUST base design video is provided by our partner Willjum.

This base was originally designed as Willjum’s very own solo base, intended for vanilla-based RUST servers and supports up to a trio group of players. While compact, the base has an open living space and plenty of storage, while having a heavy emphasis on active-raid defense.

The base design is divided into three major sections:

Bunker entrances allow players to create low resource investment bases with a high return when it comes to required raiding resources. Bunkers often take advantage of game flaws and allow players to build them into their overall designs. One major advantage of a bunker entrance is that you can build them without needing to set up conventional doorway systems and can pass loot through the walls into the bunker using unconventional methods.

Door block airlocks allow players to open their doors without risking enemy players going deep in the event the base owner dies. These types of entryways are very strategic and should become second nature to all RUST players.

One additional advantage is that base defenders can open these doors to gain quick and sometimes unexpected peeks at enemy players.

Lowered foundations sections can be used to reduce the cost of a base design while providing additional storage at no extra cost to the overall base build. When using objects such as furnaces to fill in the negative space, the furnaces will act as an uninterrupted floor that allows players to walk over them as if there were a floor placed there.

In addition, objects placed in lowered foundation sections can still serve as a blockade mechanism should the base be raided. Players can also use these sections to plant crops and hemp.

Un-lootable loot rooms were discovered in 2018 by a RUST community member by the name of Twisited. The main idea behind this concept is to place code lockboxes behind some impassible gap, such as low walls or a window blocked by a floor tile. If the boxes are destroyed, the stashes that fall out of the loot boxes would drop out of range. Now there are workarounds to this, but none the less, not all players are savvy to the concept.

Setting up roof access on a RUST base design also allows players to build access routes to landing pads and automated hangars for air vehicles, like the Minicopter or Hot Air Balloon. It also allows for players to set up SAM sites and provide access to easily maintain their ammo.

Hey everybody, this is Willjum and this is my very own solo base.

I’ve spent a lot of time thinking through and designing this base to be for me. My perfect solo building. It’s compact, has lots of storage, an open space for living, a unique shooting floor with multiple levels, and of course simple and effective bunker.

This base is divided into three main parts. Cool living area with large storage, a bed, a locker, and a workbench. A shooting floor with room for mini copter, and lots of drop-down holes for online raid defense.

And the ground floor which contains the tool cupboard within a bunker, and four loot rooms for your very best items.

There are a few blueprints that you will need. You’ll need the garage door, shotgun trap, the rug, and preferably the reinforced window bus.

Before we go any further, I’d like to say a few things. To anyone new to this channel I do more than just Rust base builds. I’d really appreciate it if you checked out my other Rust content.

I’ve put a lot of effort into all my videos, but being a new creator, my Rust gameplay receives far less attention than my builds though I put just as much time and effort. So even if just a few of you took a moment to watch and give me your feedback, it would be really helpful for me.

The other thing I wanted to say is I want to build a small Rust community with this channel, and so I would encourage you to join my Discord, and I’ll put my link in the description below. If you have any requests or you’d like to submit some clips, or even if you just want to play with me, join the Discord and let me know.

Dropping down into the bunker, you can see that the wall height is only half. This means that if raiders destroy your storage boxes, even with the new update, they will be unable to reach any of the loot unless they destroy the sheet metal.

Shotgun traps make this extremely tricky, and this base is a nightmare for anyone to raid. And finally, onto the bunker. Items can be placed inside the large storage sticking to the wall.

You can then f1 kill, respawn in your bed, move the items from the box into the tool cupboard (or the other box that’s inside the bunker completely).

This means that to raise this base you have to blow through the 1×1 wall. If you upgrade the walls to armored, this increases the rate cost by 8 rockets. And as you can see, it has a very easy tool cupboard cost and is easily manageable for a solo.