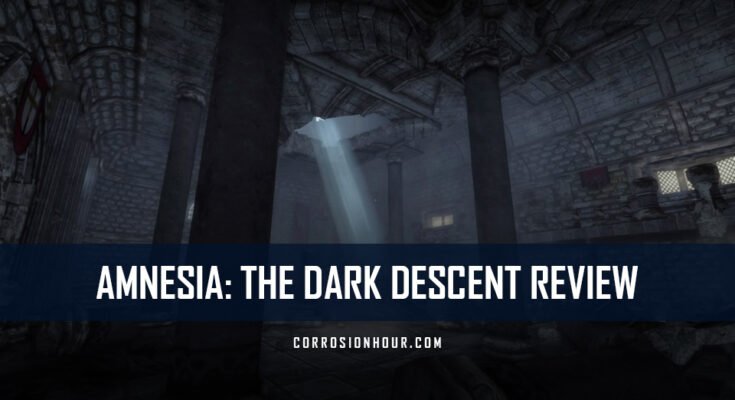 Our descent into madness begins here.

Amnesia: The Dark Descent is a shining example of how to execute a survival horror.

Before we delve deep into Amnesia: The Dark Descent, first, a little back story. In truth, the survival horror sub-niche has grown from strength to strength in recent years. I don’t know; there’s just something inherently precious about the genre itself that resonates deep within me. In part, this insatiable fascination of mine is down to several key factors.

Firstly, because of its wickedly cruel ability to trigger an emotive reaction from the player. But also, its direct reliance and severe dependence on visceral atmospherics to set the scene.

On top of that, this novel idea of using the world around you. Especially as a personal interface in do-or-die situations, appeals to me. Furthermore, it’s an inspired template in which the player must solve the old-age riddle of survival against overwhelming odds. Brutal stuff indeed.

Besides, only when our sense of humanity reaches the very brink do we truly experience the most primal desires to endure and survive. Against all adversity, we seek to claim one last mortal day. It is then, during this moment, that the stakes are at their highest — a time when we feel at our most alive.

Today, we put Amnesia: The Dark Descent, through its paces. As R.L.Stine infamously stated, “Reader beware, you’re in for a scare.”

In short, Amnesia: The Dark Descent is a shining example of how to execute a survival horror. During this article, I’ll be breaking down the game’s core constructs into more manageable chunks.

So, buckle up, folks. But first, a precautionary word of warning. I suggest you brace yourself for one hell of a bumpy ride, as the developers of Amnesia, Frictional Games, certainly have it out for you.

Set during the 1800s, Amnesia: The Dark Descent’s story revolves around English protagonist Daniel, who awakens in an eerie hallway of the Prussian Brennenburg Castle, with no recollection of his past.

With his memory all but wiped, the only clues hinting at his existence are name, place of residence, and the strange, unsettling sense that something sinister is chasing him down.

Initially, this vague sense of mystery early on leaves you with more questions than answers. As a direct consequence, almost immediately, you are thrust into Daniel’s plight as the player. Slowly but surely, splicing together fragmented pieces of Daniels’s mind. All in a bid to uncover more of the unfathomable truth.

Overall, there’s very little from a cinematic sense, with most of the story elements disclosed to the player via inserts from Daniel’s diary. These narrated extracts, collected as you go, add proper context while supplementing the story to a high degree. 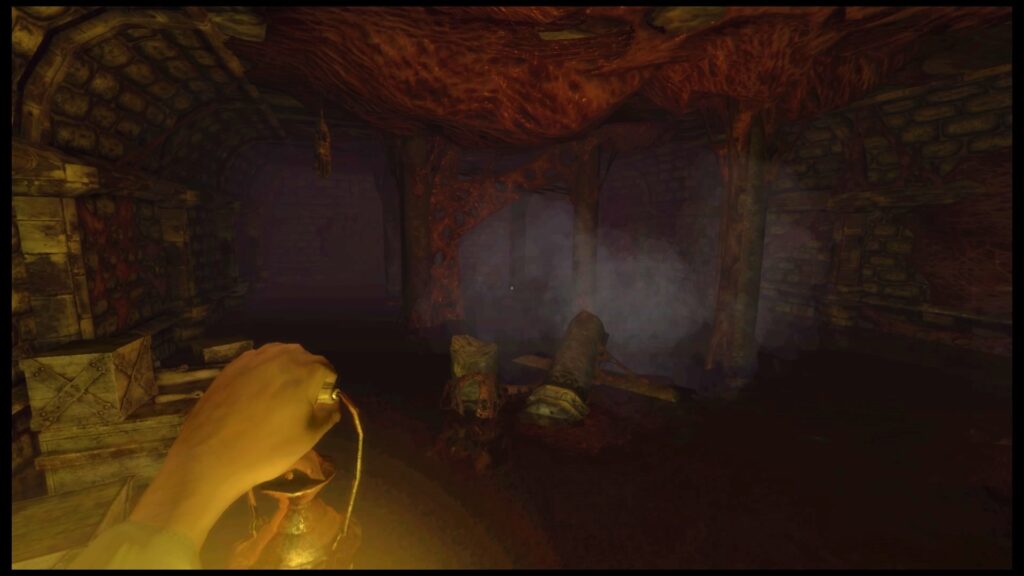 They also demonstrate the depths of Daniels’s despair, as he struggles to comprehend the bruising mind-altering effects endured from an archeological dig in Egypt many years prior. As the game progresses, though, we witness Daniels descent into madness manifest in full, as He strays further and further from reality.

At its heart, Amnesia: The Dark Descent is a horror game, first and foremost. Though that may be true, survival remains critical. Not least so, because of a lack of means to defend himself. All in all, most of the narrative cues derive from notes. But occasionally, you’ll experience a foggy memory from Daniels’ past.

These all allude to prior events and correlate with each stage in the story. All of which play out dramatically as you plot your course through a vast and imposing manor.

From a visual standpoint, Amnesia: The Dark Descent is genuinely unique. Its dark and dingy hallways, coupled with deliberately drab textures and a dim color scheme, anchor the mood throughout the game.

All the while, the level design is ingenious. Cramped underground passageways lead to nausea-inducing chaos as you combat the effects of mind-crushing claustrophobia. 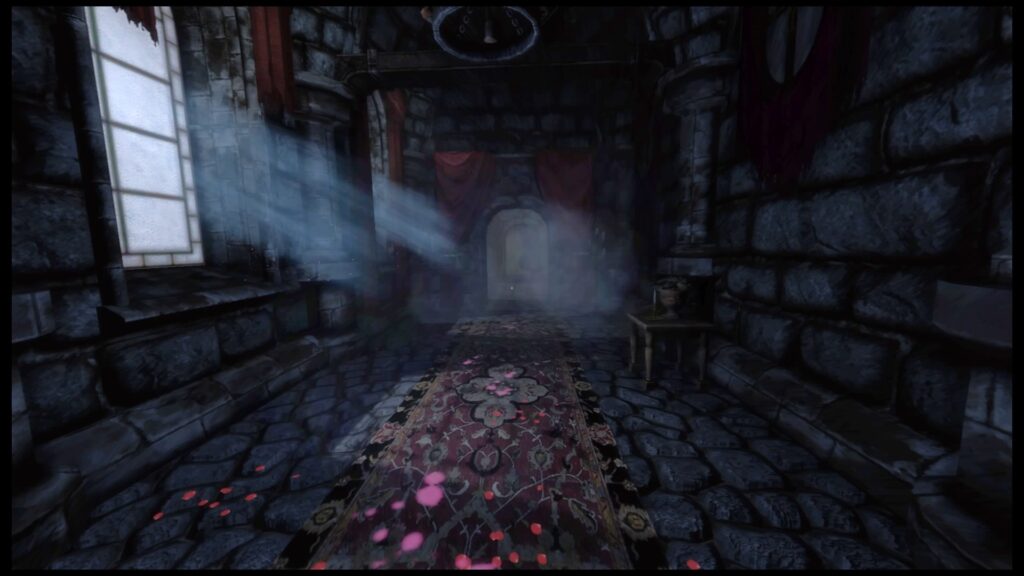 On the other hand, huge open rooms with high ceilings act as dark and dank voids. As a result, all too often, you’re left feeling exposed and vulnerable. At the mercy of whatever lies in wait. Each way you turn, Amnesia; The Dark Descent never fails to create a visceral sense of suspense through the intelligent use of environmental storytelling.

From start to finish, Amnesia is a game that displays high levels of polish. On top of that, there’s impressive attention to detail here too. Smooth textures shimmer and shine in the presence of onlooking light. Meanwhile, old stone structures show clear signs of aging decay.

Overall, the visuals are pleasing to the eye. That is, in a morbid horror sort of way. So, they more than meet the intended purpose.

Moving on, we reach the sweet subject of sound. The sound design in Amnesia: The Dark Descent is out of this world. In my mind, it offers some of the most atmospheric soundscapes I’ve ever had the distinct horror of enduring.

Let’s start with the in-game ambiance. In real terms, it’s a game dripping from head to toe with a palpable atmosphere. On that rather sad note, each area brings an element of eeriness and unease. Mostly due to the creepy, sensory-inducing score. The dissonance of which plays out in perfect harmony with Daniel’s firm detachment from reality. 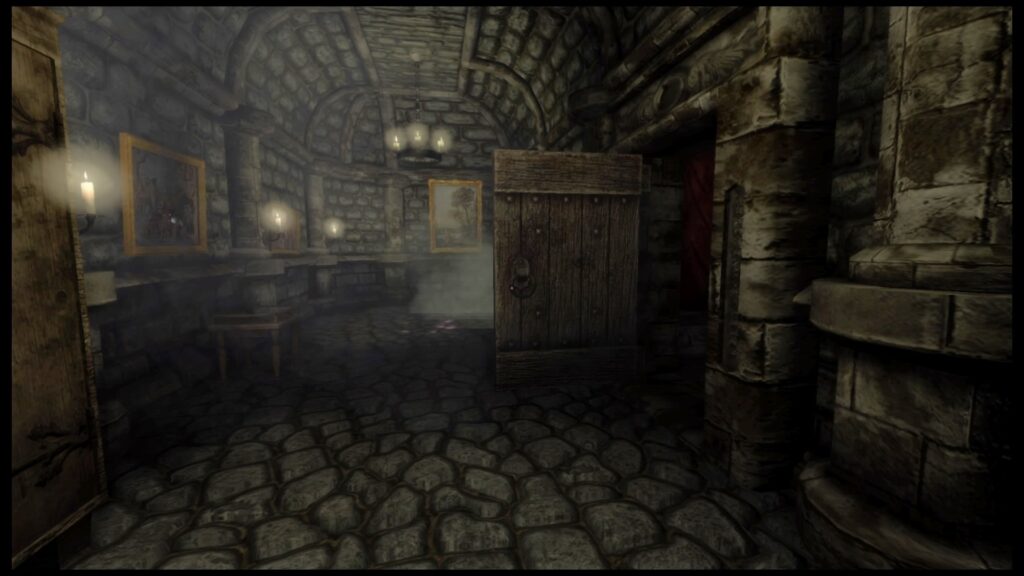 Not only that, but the sound effects are equally as immersive. For instance, the tone of oncoming mist as it consumes the room or the creepy creaking sound of a door suddenly flung ajar. Both of which conjure memorable moments of suspense.

You can quite literally cut the atmosphere with a knife.

Next up, we have gameplay. In Amnesia: The Dark Descent, Daniel will interact with the world around him. Very much via a point-and-click style of play. All the while taking part in various physics-style puzzles. These vary in complexity but typically involve the use of objects to mend machinery. Or to eliminate any blockages obscuring Daniels’s path.

On the surface then, the gameplay may seem relatively primitive. At least, by design. That said, there’s one crowning feature that makes Amnesia: The Dark Descent truly stand out. Welcome one and all to the “Sanity System.”

Above all else, the game’s core objective is to monitor and maintain Daniel’s mental state. In Amnesia: The Dark Descent, light is the only source of sanity. Subject yourself to the dark for too long, and Daniel’s world soon plunders into cataclysmic chaos. From that point onward, a series of horrific hallucinations torture his broken mind. Poor, Daniel. 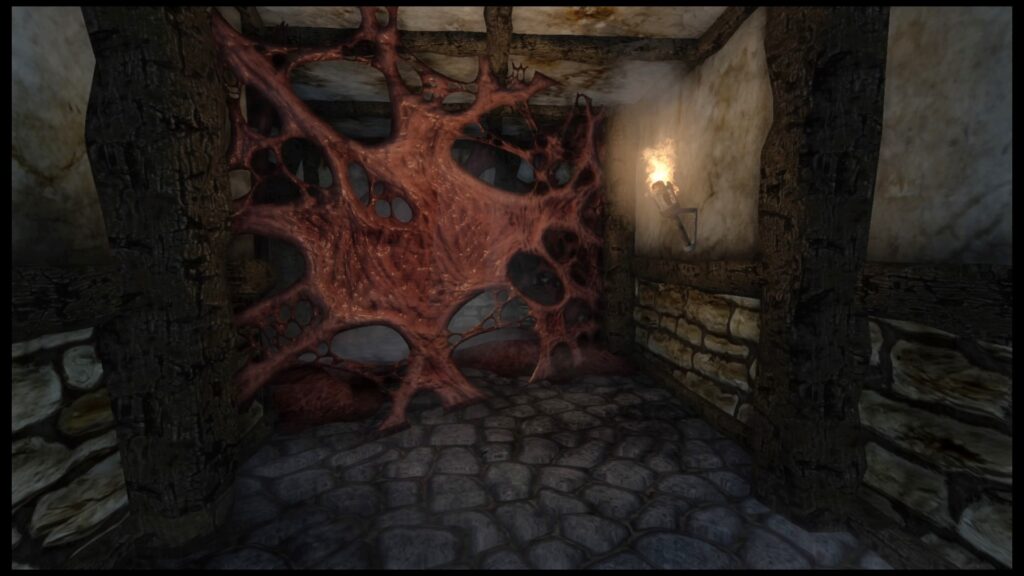 And, to add insult to injury, disfigured abominations roam the cavernous underbelly of the castle. Even worse, direct eye contact with any of them will cause Daniel to lose sanity. And with it, his loose grip on reality.

As an only form of defense, this ingenious system forces the player to use light from lanterns, tinderboxes, and candles — all in a bid to keep the dark forces at bay. Of course, it is a scarce commodity in the game. So, with little or nothing to use as protection, Amnesia: The Dark Descent is the very definition of survival horror.

There are no two ways around it, Amnesia: The Dark Descent is an immersive experience. That said, it’s also a nightmarish hellscape that’s emotionally exhausting and all-enveloping. As one of the best horror games around, I’ve played it countless times. So, for me, the replay value is endless.

But for many, the horrors endured the first time over will be enough to leave scars for a lifetime. And that is perhaps Amnesia’s most outstanding achievement. 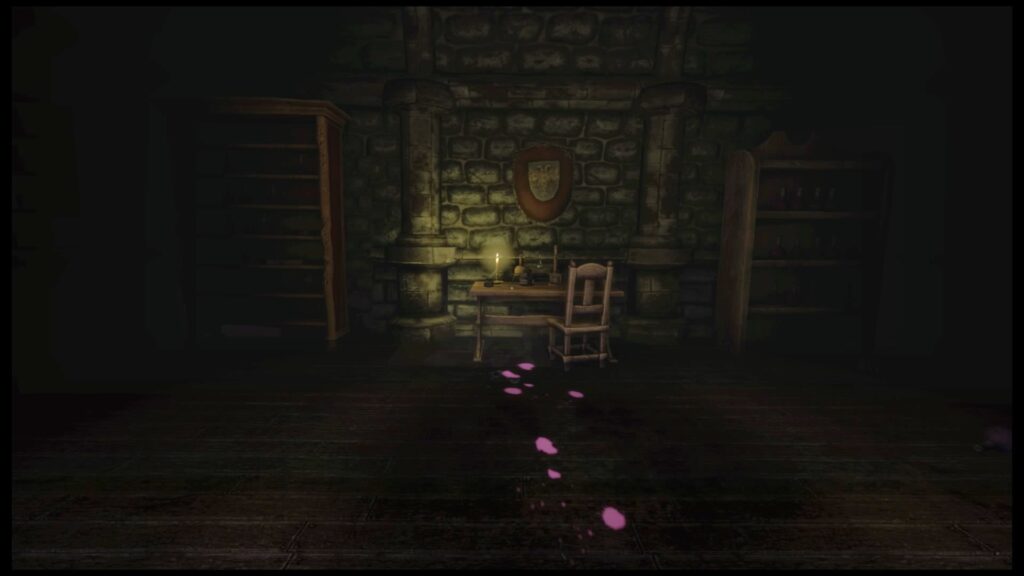 All in all, Amnesia: The Dark Descent offers up a hellish horror experience unlike any other. Through its entirety, you will push your limits both emotionally and psychologically. The sound synthesis of survival concepts and smartly executed horror tropes make this game a title not to miss.

If you haven’t already, I urge you to pick up and play this game today. The question is, can you handle it?