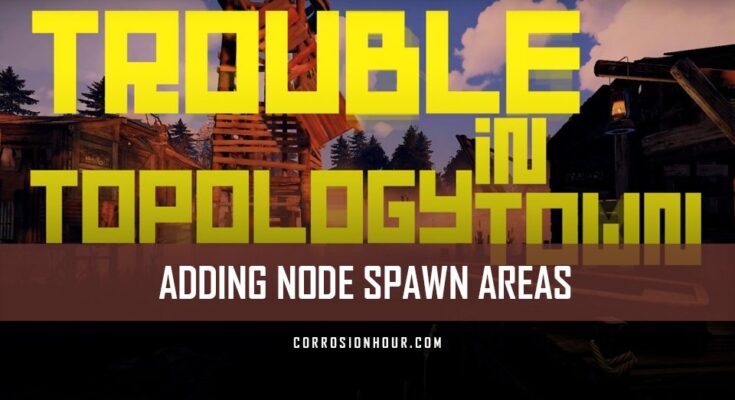 Part of a video series “Trouble in Topology Town”, this video titled “Nodes”, was created by Snowballfred. It serves as a guide for adding nodes and their spawn locations to custom RUST maps using k1lly0u’s standalone custom map editor.

Each video in the Trouble in Topology Town series focuses on an individual topology and provides an in-game example of the results.

Adding nodes on your map is as simple as painting the map with the cliff side topology.  When using this topology on the map, it will set the spawn areas to anywhere you’ve painted with the topology. Currently there isn’t a way to specify specific types of nodes, as all three node types are included:

Hello and welcome to another episode of Trouble in Topology Town.

In this episode we’re going to be covering nodes and how to get them to spawn where you want them.

Here we are again on Toplogy Island.

And to get our nodes going what we’re going to do is go to terrain paint on the top right, and drop down to topology and select cliff side from the list down on the bottom.

Simply paint your topology layer in, using a relatively small, but not to small brush size. I’m using 7 right now.

And simply paint them on where you’d like nodes to spawn.

I’m going to go up here and down there, and then we’re going to go check this out in game.

And here we are, here’s the area in which we painted our topology.

And because we painted over a grass texture, we’ve gotten some bonus trees and collectibles.

Once again this is entirely dependent on biome. And obviously this is a temporary biome and texture.

So if it was in an arid texture we wouldn’t get trees, but the nodes would still spawn.

Take it easy people, peace out.