Learn how to set up 8 of the most useful RUST keybinds, like muting other players, toggling auto-run, toggling crouch, and more.

Not all games freely give the player access to an in-game console. However, Facepunch the developer of RUST is generous enough to not only leave the console active but also lets players set and unset specific settings.

Have you ever thought to yourself, wouldn’t it be handy if I had a button that could mute other players in a pinch? Well, it is possible with legitimate and permitted console commands. Knowing is half the battle.

Without admin privileges, you won’t be able to use the full breadth of commands that the in-game console provides, such as toggling the noclip command that allows players to “fly” or anything remotely along those lines. But if it’s something you can do as a player or a client setting that can be modified in the settings menu, you’re allowed to assign a change in its value to a keypress.

It’s here where you can get creative and take advantage of RUST keybinds. And for those lucky few with admin rights on a server, there is a wealth of handy keybinds you can set up to make your administration process even more comfortable. All you need to know to get started is how to set up RUST keybinds.

Here’s our list of 8 of the most useful RUST keybinds.

To implement these keybindings, press the F1 key to open the in-game console, copy and paste, or retype the bindings below into the console and hit the enter key. The console interface looks like this. 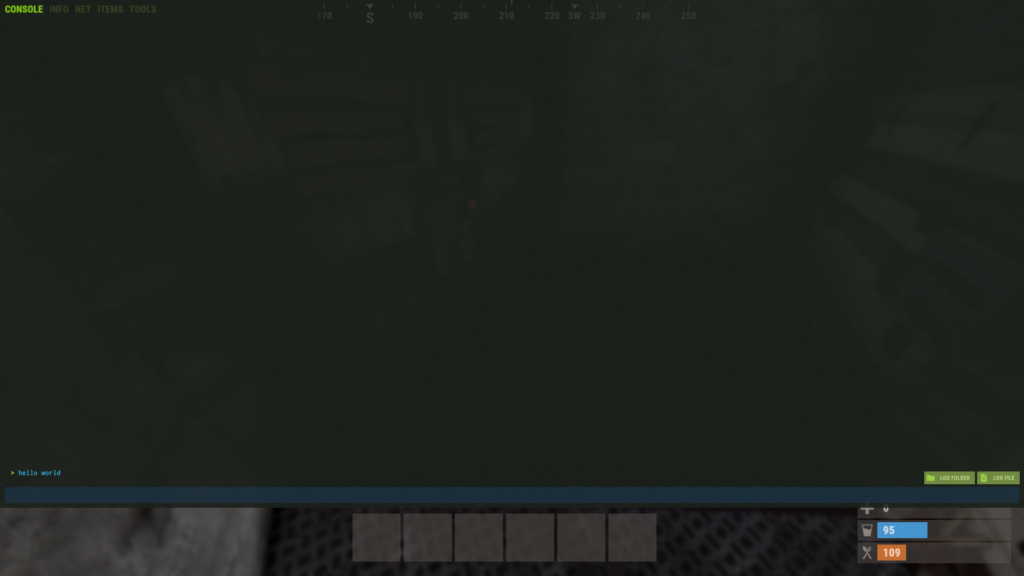 Once you close the console, the keybindings should be immediately enabled. Be mindful of copying spelling and syntax precisely if you choose to re-type the command line yourself.

In these next 2 examples, we have used O and P keys as the bound keys. If you utilize multiple sets of these bindings, remember to change the O key or P key of input.bind o to the keys, you would prefer.

Keybind to mute players in RUST

If you want to mute players without having to stop and open the menu, these keybindings set your ‘o’ and ‘p’ keys to turn only player’s voices off and on, respectively.

The command line audio.voices can be any integer between 0.0 and 1.0 (Actually, you can go higher than 1, but that will push your volume incredibly high). Instead, if you want to set the voices to half volume, change the number to 0.5.

Keybind to mute instruments in RUST

As fun as the instruments are, they can be intrusive and abused by players to block out useful sounds.

Much the same as the voice volume control, the audio.instruments line is an integer between 0 and 1.0. Meaning you can set it to any variable you like.

Toggle flashlights or lasers keybind when aiming down scope in RUST

Suppose you’ve got a Weapon Flashlight or Weapon Lasersight installed on your weapon. It’s an extra keypress to stop and toggle it on and off. You also may not want the flashlight on while you’re getting about at night. This keybind will turn on the flashlight or the laser attachment when you aim down the scope.

Auto-run and sprint keybinds in RUST

It’s a long way to run from one side of the island to another. But we all end up making that run at some point in each wipe. Save your hands from RSI using this handy keybinding that combines the running forward with the sprint command.

Once you’ve pressed the E key, you will move forward without having to hold any key down and will sprint so long as you have the food and water reserves to do so. If you want to stop running forward, tap the W key or your default forward movement key.

Since it also locks down your sprint command, you will also have to tap shift to toggle sprint off unless you want to leave it on.

Some players prefer a toggleable crouch setting. If this is you, try out this keybinding.

When you press the C key your character will enter the crouched state and not get back up until you press the default crouch key.

Toggle freelook to middle-mouse In RUST

If you don’t like moving your thumb to the default alt key setting, you can change it to the middle mouse button (or any mouse button for that matter). Just remember binding it will also unbind it from the L-alt key.

Auto-craft bandages on the go in RUST

In a pinch, you might need some Bandages. If you’ve been picking up Cloth while you travel, it’s handy to be able to turn that cloth into bandages without having to stop and access the crafting screen. It’s much safer too, a still target is a dead target. You’d much rather be able to keep your eyes on your enemies, rather than your craft screen.

It doesn’t have to be bound to the H key; that’s just a handy free key. You can also increase the number of bandages you create by changing the 1 at the end of the line.

However, be aware, if you change that number to 5, and you don’t have enough cloth to craft 5, the command line will fail, and you will make no bandages instead. Better to just mash the craft once button to queue up a few.

Keybinding to change your FOV in RUST

Changing your field of view setting can help your aim, depending on what type of gun and or combat you’re engaging in—as such, being able to change your FOV on the fly is a handy ability to have.

A higher FOV will broaden your peripherals, letting you see more of what is on your immediate left and right. The broader vision is handy for close-range fights when you need to be more aware of what’s going on in your immediate vicinity.

A smaller FOV will close your peripherals and flatten the image so that there is less screen warping and also makes objects in the center of your screen appear larger and giving you more reliable movements when trying to aim at targets from a distance.

You will want to experiment with whatever upper and lower FOV limits work for you and set them to the keybinding by changing the number at the end of the line accordingly. If you have a mouse with plenty of spare buttons, you could bind any one of those to the same function.

Scratching the surface of keybinds in RUST

This guide contains some of the handier and frequently requested keybinds, but you have the freedom to work your whole keyboard and change just about all the settings in RUST freely. Don’t forget, for admins, there’s also a plethora of RUST keybinds for RUST server commands that can improve the quality of life.