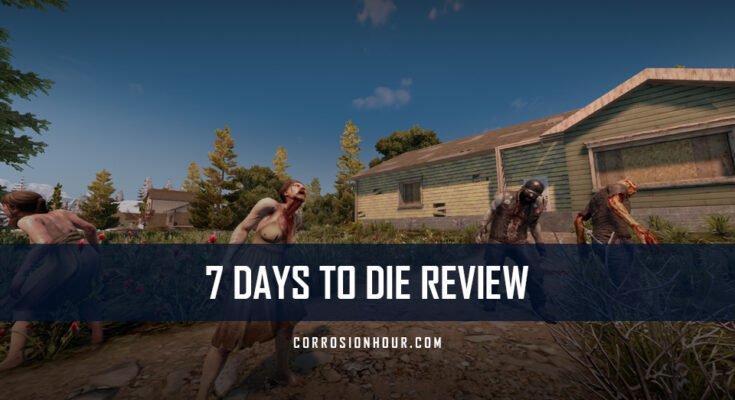 Surviving a zombie apocalypse has never been tougher.

7 Days to Die and the development team behind it (The Fun Pimps) have a pretty inspiring origin story. They first marketed the game via a Kickstarter campaign on the 16th of August, 2013, and it quickly picked up a lot of traction throughout the months leading up to its release. Whoever pledged to the campaign or donated via PayPal got the chance to play it on release, and suffice to say, people were excited to see it develop into something greater.

The Fun Pimps themselves went from a tiny group of three developers to an entire team of talented software developers that molded 7 Days to Die into what it is today – an iconic survival horde crafting game.

As you might’ve guessed from the introduction, 7 Days to Die advertises itself as a sandbox zombie survival game. What sets it apart from other zombie survival games is the 7th Day Horde. A massive and continuous horde of zombies spawns every 7th night, forcing you to bunker down and defend your position. The mechanic that makes this concept even more ruthless is the difficulty progression – the more in-game days pass, the stronger and faster zombies become.

A concept like this may not be innately unique, but The Fun Pimps should get credit for taking all of the good features from zombie/survival games and mixing them into one well-rounded hybrid game.

One thing to note is that this concept wasn’t always as fleshed out as it is today. The basic idea of the game always stayed the same, but the open-world sandbox aspect that was advertised unfortunately stunted the game’s growth in the beginning.

In summary, The Fun Pimps initially had ambitions that exceeded their abilities, making earlier releases of 7 Days to Die very lackluster compared to the product advertised on the Kickstarter campaign. A bad post-launch period wasn’t enough to discourage their small team back in the day, and they continued to slowly update it until they received enough financial freedom to hire more developers.

The game world was said to be decimated by nuclear warfare, which also seemed to cause the Zombie uprising. It’s unknown whether the zombies appeared due to nukes or other biochemical weaponry. What we do know for sure is that they will stop at nothing to devour your carcass.

The developers plan on adding a fully-fledged story campaign to the official ‘Navezgane‘ map, and there are already traces of some characters that the team will expand upon in the future. One of these is the “Duke of Navezgane,” and he’s been a prominent background figure since earlier releases. We’ve so far only had a chance to read or hear about him through traders and notes. We will surely see more of that character as the Alpha builds progress.

Graphics and textures in 7 Days to Die are all over the place. Considering that one of the main mechanics of the game is the ability to build anything, not much emphasis was put on creating realistic textures, as it would’ve further worsened in-game performance. The newest Alpha builds did touch up on the textures and lighting, but people never really played it for the graphics in the first place.

The graphics aren’t photo-realistic as in newer games but still attempt real-world appearance. Pairing partially photo-realistic graphics with a Minecraft block-building system is quite hard on performance, so Fun Pimps didn’t invest much of its resources in graphics early into the game’s life cycle.

As for zombies, their individual character models look amazing, and you can see just how diverse and detailed each zombie model is. For example, military zombies walk around with their entrails hanging out, implying that you won’t have an easy time bashing their helmeted heads in. There are many more zombies just as unique, so inspect some of them if you plan on picking up the game.

7 Days to Die is one of those rare games that successfully recreates a real sense of doom. This is because of the various points of interest found around Navezgane or a randomly generated world. Many buildings and houses have their own stories to tell, letting you discover what went down in each individual household or institution.

Encountering traces of the old world in this game creates the atmosphere, immersing you in a way that makes you feel the sadness of the location you’re looting. There will naturally be boring points of interest that lack deeper meaning. Still, the developers put a lot of focus on ensuring that most locations successfully immerse you into the setting.

On the other hand, the general sound design is generic, but it glues each building block of the atmosphere together – forming one very immersive and atmospheric zombie survival game. Improvements could be made when it comes to many of the sounds in-game, but it’s good enough to where it’s not at the top of Fun Pimp’s priority list and doesn’t really need to be.

Besides looting, general gameplay in 7 Days to Die has to be the main thing that attracts and keeps its player base. There are too many factors to consider when it comes to general gameplay, but the most important things to outline are definitely:

The reason behind this game’s success lies in those four gameplay aspects; covering them will give you an idea of why it works so well.

First of all, combat in 7 Days to Die is currently in a passable state. It’s nothing extraordinary but gets the job done in terms of effectiveness. Melee weapons have largely been improved upon since earlier releases and are in a decent state overall. However, they do start to fall off as more days progress when zombies become faster and stronger.

Firearms are in somewhat of a similar situation, and their only real downside would be the clunky handling and animations. They’re vital for later stages of the game and act as your only counter to feral and irradiated zombies. Regardless, getting familiar with the weapons and combat in this game shouldn’t be that much of a problem in the beginning stages.

Crafting and building go hand in hand, and they’re undeniably two of the most useful mechanics in 7 Days to Die. The crafting system isn’t too complex, yet it’s still broad and diverse, allowing you to experiment in ways you see fit. The same applies to building with various shapes added in the recent Alpha version.

The synergy between these two systems is what defines this game. You’re bound to spend dozens of hours inside crafting menus trying to figure out which building blocks you need to survive the next and inevitably harder 7-day horde night. The possibilities are endless, and you’ll need enough resources and intellectual finesse to survive the hordes that await you.

Each of these attributes has specific skills or perks associated with them that you can level up via points. Attributes themselves need to be leveled up so that you can access higher skill levels in that attribute tree. Skills are insanely fleshed out, and leveling them up will impact the way you play the game in one way or another.

We have to admit, a system like this was a smart move; it encourages players to spend their skill points wisely in order to build a unique character. Besides the obvious benefits, this can also help players roleplay more efficiently. No system is without flaws, and investing in attributes like Strength and Intellect is still a necessity due to the crucial skills those attribute trees possess.

The attributes/skills system has been tirelessly overhauled for the past couple of years, with developers not really knowing in which direction they want to take it. This is still the case today, as they’re, once again, planning on changing skills for the next Alpha release later this year. Players worldwide love the current progression system, and not many are keen on another patch that revamps skills.

Skill magazines are also a vital part of the character progression system. These are not obtainable through conventional perk points and are found only in random loot around the world. Another thing to note is that each skill magazine will belong to a series of magazines, and you can choose to collect all of them for an additional bonus. Always be on the lookout for skill magazines. Some of them grant profoundly useful perks that could help you escape a dire situation in the future.

Taking everything we’ve mentioned into consideration, we can confidently say that 7 Days to Die gets better the more you play it. There are many ways to interact with the map around you, especially if you’re sticking to huge, randomly generated worlds. It’s hard not to want a second playthrough if you’re an avid fan of the zombie survival genre.

Lastly, 7 Days to Die is also known for its efficient multiplayer, and it’s been one of the main reasons players keep returning to it. You can easily create a server and invite your friends through Steam, allowing for a quick, easy, and neverending CO-OP experience.

Public servers are also prominent, letting you play on servers hosted by people you don’t know. Setting up a dedicated server doesn’t require any external tampering and can be done directly in-game.

Don’t forget to prepare; you have 7 days.

The synergy that crafting, building, looting, and skills have in this game can hardly be matched by other survival games. Rarely do such complex, and sophisticated systems work well when paired together, and it shows just how dedicated the Fun Pimps are to polishing their product.

Although quite barebones in the beginning, it slowly and gradually received more content over the years, molding it into one of the best zombie survival games out there. The state we see it in now is a far cry from what it was in 2013, and we can only thank Fun Pimps for sticking with it through thick and thin.

The future of 7 Days to Die looks rather promising, so why not be a part of it?