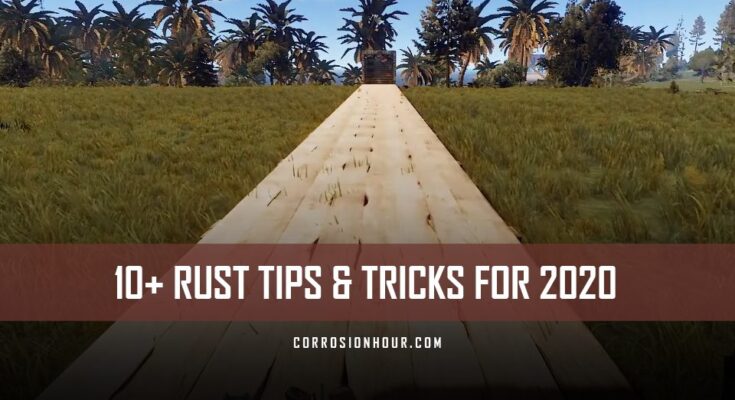 10+ RUST Tips and Tricks for New and Existing Players

This video, 10+ RUST Tips and Tricks for New and Existing Players, is brought to you by our partner xRaw.

In this video, xRaw walks us through some lesser-known tips and tricks that when having up your sleeve can improve your RUST gameplay and get you moving at an accelerated rate for the next game wipe! He covers a few tips that allow you to benefit from the safety measures imposed at the Outpost and how you can take advantage of them to increase your in-game profits.

Along with this are a few handy RUST base-building techniques that can help you secure your base and make it more costly for raiders to break in.

Hey guys, welcome back to another video. For today’s video we have 10+ RUST Tips and Tricks which I knew in my first thousand hours. These can be used for beginners and experienced players if you don’t know them.

Tip number one is using door block airlocks. I have to repeat this one so often because it’s so important. I see a lot of bases with airlocks similar to this, where if you leave the doors open or die, a raider can simply run straight in. You want to try and aim for the doors to block the doorway when opened, making it impossible for people to run in.

There’s a number of different ways to do this, so I’ve just shown two of them here.

Tip number two is having spare sleeping bags. There isn’t anything worth than dying and seeing a bag timer. So to avoid this, store a few bags around your base and remember to rename them so you know which is which. If you place bags too close, they’ll share a timer, so be sure to place them far enough away.

If you look down at the ground and keep walking, watch your footsteps. 40 steps in-game is enough. Or 12 to 15 seconds of walking. I usually keep one inside my base and two to three outside the base just in case.

Tip number three is breadcrumb sleeping bags, when you spawn on the beach after joining a server, rather than farming up near the spawn where it’s busy, run straight to where you want to build. Place bags on the route which will act as waypoints. If you get killed or die, you don’t need to run as far each time. You can simply farm up once you get there. And even then if you die once you get there, you can spawn in a bag nearby and restart, rather than respawning at the beach and repeating the same journey multiple times.

Tip number four is door camp checking. There’s a number of ways of doing this, such as looking through a metal shopfront or using a door block airlock and looking through the gap. The most common way, however, is turning on your campfire. If your comfort goes over 50% then someone’s definitely outside. So just wait it out.

Tip number five is using barbeques for storage. I always get comments on my base builds why I use so many barbeques. And the answer is they double your storage. A barbeque not only fits in the same space as a small box but also holds the same storage and allows for a small box to be placed below. Essentially doubling the storage for that space.

You can fit these into plenty of loot room designs to fit your needs. I’ve shown you two different ones which I use often here.

Tip number six is another trick I’ve used for years. I always forget that I’ve left food in the fire and burn it. So to get around this, you want to fill three of the slots with food, allowing one for wood and one for charcoal. When the food is cooked, it will turn the campfire off and throw the food to the floor, meaning it doesn’t burn.

If you keep turning it back on, it will pump out the three pieces and it will keep cooking until the next three are cooked. Using this method is a faster way to cook, as you manage three pieces rather than two.

Tip number seven is cloth for scrap. If you’re having a hard time getting ahold of cloth you can essentially buy cloth for scrap at the Outpost. For 40 scrap you can buy tactical gloves and recycle them. You get 10 leather and 164 cloth per glove, if you quick recycle or ten leather and 200 cloth per item if you recycled the components one at a time. This means you can essentially buy 1000 cloth for 200 scrap.

Tip number eight is farming at the Outpost when you’re in range of the Outpost you can’t equip weapons or kill players without being killed by the turrets. You also can’t loot body bags. To use this to your advantage you can farm trees within this zone. As long as you swap your tool to an empty slot every 5 seconds you can reset the timer, allowing you to farm in safety.

Not only can you farm frees, but nodes, barrels, and crates as well. Because of the turrets, you’ll be in safety. If you combine that with a recycling trip afterward, you can be sure you won’t lose your stuff.

Tim number nine is the low grade at Outpost. This one isn’t the most cost-effective, however, you combine enough low grade to make two furnaces for 50 scrap, which is pretty easy to get ahold of when farming around the Outpost. Alternatively, if there aren’t enough barrels and you have the crude oil available, you can smelt the crude oil in the Outpost in safety, before running back to your base to craft the furnaces.

Tip number ten is something I’ve used in a number of my builds. Doors that are left open are actually more expensive to destroy. A closed sheet door is around 63 explosive ammo and an open sheet door is around 100 explosive ammo. You can use this to your advantage by using honeycomb or open areas as extra doors. As I show here. Not only do they need to blow the single sheet door, but both of the double doors here to get in, massively increasing the raid cost.

This method can also double as an extra double door airlock for checking for outside door campers.

Tip number eleven is buying scrap from the Bandit Camp. This is pretty handy for solo players who may not use things such as HQM or the higher tier key cards.

The shop in the Bandit Camp buys them from you for scrap. You can get 80 scrap for red key cards, which you may never use or need. And you can get 2 scrap per high-quality metal. With the number of new electrical components, it’s pretty easy to get high-quality metal by recycling them. Making this a pretty handy way to get some extra scrap.