At the best of times, the world of RUST is not an easy place to survive in. If human players or AI-controlled NPC enemies like Scientists and Dwellers don’t send you to meet your maker, the vicious and bloodthirsty animals or the sheer inhospitable quality of the land will.

Weapons are a crucial tool for survival, but having the proper armor for the right occasion is just as if not more important. Carrying a Flame Thrower around may make you look like a wanderer not to be trifled with, but that giant blowtorch won’t stop you from succumbing to Mother Nature.

Below we’ll cover some of the top Armor combinations you can mesh together, but feel free to experiment with the various cocktails of apparel that you find on the list. There’s a degree of subjectivity involved, and there’s the right tool for the right job, so context is also key.

A quick note as well before you read on, this list primarily focuses on the three main Armor aspects of Projectile, Cold, and Radiation protection, and doesn’t include any items that can be purchased externally or were only available through special means, so no Ninja Suits, Frog Boots, or Headsets here. A trademark of new players (particularly at the very start of the game) or those without a huge deal of better quality resources, a full set of Wood Armor will see most fresh players well until they get their hands on materials needed to upgrade their attire.

Performing fairly poorly on all the major statistics listed above, the Wooden Armor does shine in shielding the wearer from melee damage, topping out at 105%. The blueprint is also known by default, so it’s a decent starting point for new RUST initiates.

The Oak-inspired get-up should be looked to be replaced as soon as possible, however, especially if you find yourself in a Snowy biome. The pitiful lack of any protection from Cold or Radiation (and very low Projectile to boot) will lead to players perishing quickly against enemies with more advanced equipment. A quick mention for the only item on this list that can’t be crafted (it instead must be bought with 20 Scrap from one of three Fishing Village vendors), the Wetsuit has very specific but tactical uses for players that pick it up early on.

Offering moderate Cold and Radiation protection that will help when scavenging in irradiated settlements early on, the Wetsuit (much like its name suggests) comes into its own with its unique benefit of making the user resistant to the “Wet” effect.

This surfer-appropriate apparel also allows those who have it equipped to swim in Snow Biome waters worry-free.

By no stretch of the imagination is it meant for combat, the Wetsuit is a potent tool when used in the right situation. Though it may look equal parts primitive and intimidating, equipping the Bone Armor and Bone Helmet offers a decent amount of protection from forms of damage but practically nothing when it comes to surviving against the harsh elements of the world.

Much like its wooden counterpart, the Bone Armor is much more suited to defend those who wear it against attacks from melee weapons, albeit with a lower value of 80% because it lacks an extra item, in this case, a form of leggings. It also prevents the user from wearing any additional clothing, which is a big negative.

That said, the armor still provides protection for the user’s legs, freeing up an extra slot in the active inventory. It’s a known blueprint from the get-go and requires very few resources to create.

Having the full Bone Armor is very situational and only really performs as a starting armor kit that is worth making should you have nothing else. It’s basically a slightly better version of the Wooden Armor. If raw, unadulterated power and brute force are what you’re after, look no further than the inelegant and monstrous walking tank that is the full suit of Heavy Plate Armor.

The full ensemble Heavy Plate Armor is the ultimate tool for waging a one-person war on enemy fortresses and protecting your own shelter from outside invasions. With a whopping 250 protection against projectile damage, it’ll take a lot of deadly and focused firepower to stop you from steamrolling your way through encampments.

It’s, of course, not without its downsides. You’ll incur a significant movement penalty from your hefty new clothing, 80% to be precise if you’re wearing a complete outfit.

The Heavy Plate Helmet also obscures a hard chunk of your peripheral vision, relegating your view to a rectangular wedge in the center of the screen, meaning you’ll be that much more susceptible to attacks from behind and to the sides.

Being all-metal also means you have no hope of lasting in a cold environment, and any fire-based weaponry or explosives will be your (very fast) undoing. Very much a one-trick pony (but to be fair to it, it’s a pretty good trick), this adoption of the Roadsign Armor will make your personal defenses against enemies looking to put a bullet in your very strong but a strong breeze and some snowflakes will see you fall from grace quickly.

If anything, this is an armor loadout for the aggressive, gung-ho raiders of the world who actively go out of their way to look for trouble rather than relegating themselves to a quiet life of foraging for materials.

The very prominent 130 Projectile damage shielding is starkly juxtaposed by the literal 0% Cold protection, with a decent amount of Radiation defense capping off the wardrobe.

If you’re armed to the teeth, love a good scuffle and enjoy causing mayhem and destruction wherever you go, you and this armor set may just be a match made in Heaven.

Be warned, though, that the world can be a very harsh place, often quietly weakening you to a fatal point without you even realizing it. One of the most common attires you’ll see players donning in the entire game, Hazmat Suits‘ key attribute and appeal are rooted in what its namesake property alludes to, that being protection from the rads of the environment.

Even though its appearance lends itself to the natural activity of exploring dangerous regions like Monuments with relative safety, the Hazmat Suit still provides the wearer with a very respectable amount of Projectile defense.

You also don’t need a ton of resources to create it, and it can also be found in a number of different lootable locations in the world.

Being so well versed in Radiation means that it falters when it comes to defending against the Cold, with a measly rating of just 8%.

So if picking apart Monuments is your thing, invest in a Hazmat Suit. Just have something warm in your back pocket, just in case. Having the default skin will also cause you to be a conspicuous glowing beacon to other players, so bear that in mind. Suppose you’d like to opt for more resistance to the elements around you than bullets whizzing past your head. In that case, the above list of items should satisfy you quite comfortably without too much need for time or material investment.

While its Projectile protection of 95% is nothing to be sniffed at, this assortment comes into its own when nullifying the threats of the world, providing you with a strong Radiation rating of 29% and a very powerful Cold rating of 58%.

You’ll be a tough nut to crack should you come up against an opposing force, but this choice selection is probably more for those that only fight when challenged, players that are the instigatees rather than the instigators.

The Cold protection is more than enough to prevent you from ending up as a living ice cube, and the Rad protection is good enough to allow you to venture into most hostile lands the game can throw at you bar some of the more extreme Monuments like Launch Site or the Power Plant.

Combining effectiveness in Cold survival with a high Projectile rating, this clothing combo is king of the hill within the Level 2 Workbench class. This list of parts is the best materials can muster together to offer great stats in all areas.

As well as allowing you to shrug off incoming fire very competently, a fantastic bonus of this setup is that you’ll be safe from the cold in Snowy landscapes in both the day and night, so you won’t need any extras on hand once the sun goes down.

The Wolf Headdress is a favorite among many players and often tipped as one of the top 3 pieces of headgear, and it’s easy to see why when it has so many benefits, especially when worn with a Bandana.

This armor setup is one of the most balanced ones you can opt for, having very good stats in pretty much every metric that matters.

Combine the above with a decent assortment of weapons like the Assault Rifle, the P2, or the Double Barrel Shotgun, and you’ll be one well-prepared son of a gun. Losing out on the number one spot ever so slightly, but by no means does that mean it’s not worth having; this smorgasbord of gear performs exceptionally well in PvP situations in the late game but is undone by its Achilles heel of Cold resistance.

While statistically, this is the best choice to go for when it comes to Projectile damage resistance at a very healthy 145%, this package is let down by its inability to protect you from Cold, a huge detriment at 9%.

If you’re in a safe and climatically mellow world and want to reign war down on all who oppose you, by all means, adopt this gear and bring the pain to all who are unfortunate enough to cross your path.

Just check the weather before you go out and indulge in the red mist. A chill in the air can bring an abrupt and grizzly end to your shenanigans. 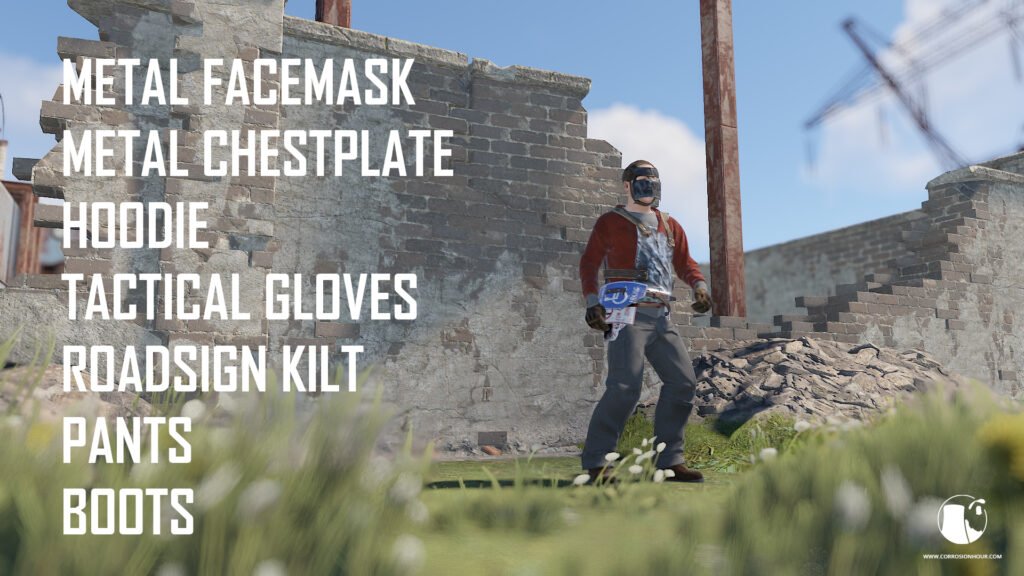 The top of the top tier, this combination of elite equipment will see you incredibly well in almost any situation against any opponent. Utilizing what is essentially the best type of clothing and armor in every category, you’ll be a tour de force, a warrior ready to face any challenge.

The Metal Facemask and Metal Chest Plate will do their Workbench Level 3 duties and provide more than ample Projectile protection, while your Tactical Gloves will reduce your aim sway to keep you on target.

The Road Sign Kilt will keep your legs from harm, and the clothing chosen will help to top up your Cold percentage, as much as possible.

Considering all areas of performance when it comes to armor, this combination of items will make you into a truly powerful and well-equipped player. Few enemies will be able to challenge you; few environmental challenges.

Knowing the best armor combinations in RUST can only help

RUST is a vast game with so many different mechanics and systems to master, with the armor and gear kits being one of the many. With this guide behind you, you should now have a sense of the best armor combinations and when to wear them. The next step is to consider getting some RUST skins to provide the appropriate camouflage for the environments you’ll be spending most of your time in. There are ways to acquire RUST skins for free, or you can skip the hassle and buy RUST skins directly to begin building your skin collection.